Spot power prices increased yesterday on the back of weak fundamentals, primarily strong demand and reduced wind generation. There has been little change to demand levels today but a slight uptick in wind production is expected tomorrow; prices should stabilise as a result. Gas prices moved higher yesterday as a consequence of weaker gas flows following numerous outages in Norway. The UK gas system remains short this morning with hardly any change in Norwegian production and above average demand resulting in weak supply; upward movement can be expected today. Today's prices can also be found in an easy to read table on our 'current UK energy price' page.

Outages at the Kollsnes processing plant, the Troll gas field and the Asgard gas field in Norway led to a drop in overall gas flows of 43mcm, resulting in a short UK gas system. Combined with the current cold weather which is pushing consumption levels higher, gas prices increased across the curve. Most power prices also moved higher throughout Wednesday's session as low wind production and high demand offered support to the bulls. Further along the curve some seasonal contracts recorded a loss and were influenced by weaker coal and carbon.

The gas curve continues to display upward movement this morning with support coming from rising Brent and a stronger Euro against the Pound. Cold weather continues to offer support, while overall gas flows are still quite weak. The majority of power contracts moved higher this morning but Day-Ahead and 2015 seasonal contracts were the exception. The prompt fell by £0.20/MWh with wind generation expected to improve tomorrow.

Market close data has revealed that the 1-year forward price for both commercial gas & commercial electricity decreased - closing at 46.65ppt and £44.13/MWh, respectively. This can be seen in the graph below. 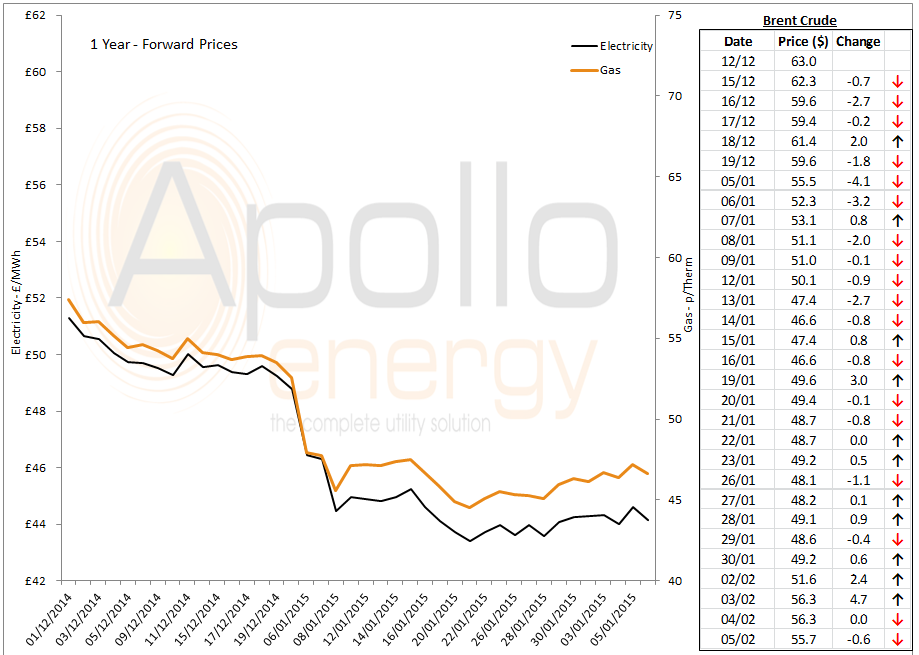