Spot power prices recorded a large decrease yesterday afternoon following numerous gains in previous sessions. An expected increase in temperatures has supported the bears but weaker gas is the main market driver at present. Gas prices opened higher yesterday morning but fell throughout the session on the back of an increase in Russian flows coming into Europe. Further losses were recorded this morning as Russian flows are around average levels, with a warmer weather forecast also weighing on contracts. Today's prices can also be found in an easy to read table on our 'current UK energy price' page.

Gas prices moved down yesterday afternoon with influence coming from an expected drop in demand and improved gas flows. The UK gas system was long throughout the session, while LNG supply remains healthy. A stronger British Pound also resulted in reduced costs in importing gas from Europe. Power prices displayed losses and were influenced by falling gas and a warmer weather outlook. Wind generation levels were also expected to remain strong today which further weighed on the near-curve.

Movement on the gas curve is similar to yesterday afternoon, with an increase in Russian flows into Europe helping the majority of contracts shed from their price. Warmer weather should also reduce demand levels over the weekend, while numerous LNG deliveries are expected to arrive in the UK this month. Power prices continue on a downward trend with strong wind generation and mild temperatures resulting in losses on the near-curve. The rest of the curve was dictated by falling gas following positive news regarding Russian gas transit yesterday.

Market close data has revealed that the 1-year forward price for both commercial gas & commercial electricity decreased significantly - closing at 46.68ppt and £44.23/MWh, respectively. This can be seen in the graph below. 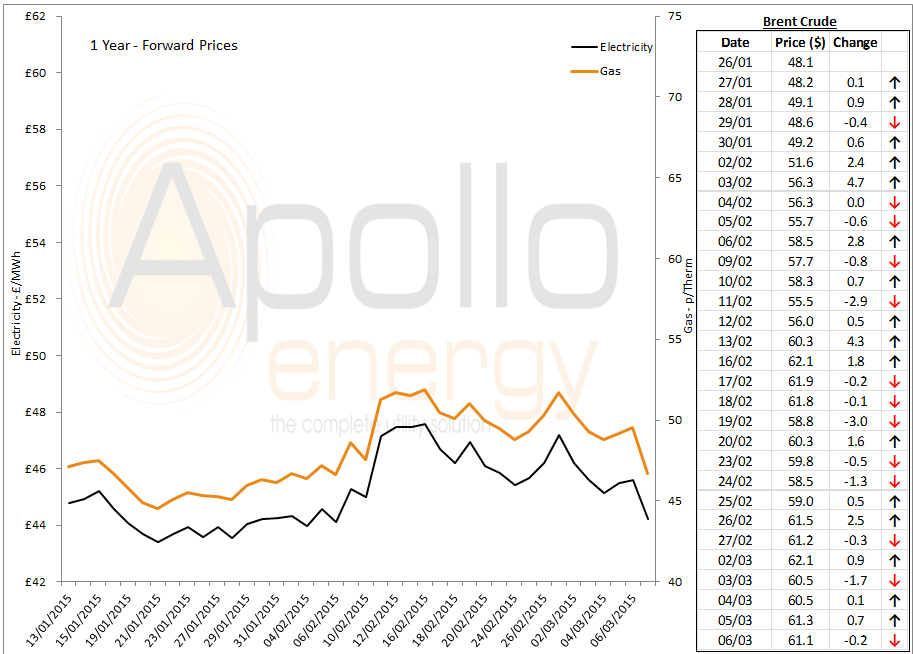 Brent 1st-nearby prices showed very little movement yesterday and have recorded a loss of just $0.15/b this morning, currently trading at $61.09/b.