Spot power prices stabilised yesterday as colder temperatures were offset by improved supply levels. Temperatures are expected to rise to around the seasonal norm, if not slightly above tomorrow and this should weigh on prices this afternoon, combined with the usual drop in demand on Fridays. Gas prices moved down yesterday as despite an increase in demand, the UK gas system was comfortable for most of the day. A slight uptick in temperatures tomorrow should provide support to the bears as supply levels remain healthy; losses are expected this afternoon. Today's prices can also be found in an easy to read table on our 'current UK energy price' page.

Gas prices continued on a downward trend yesterday despite colder weather which led to the highest gas demand since March. Supply levels are healthy at present as Norwegian gas flows continue to strengthen; the UK gas system was close to balance as a result. Power contracts followed their gas counterparts and moved down, while an expected surge in wind also weighed on Day-Ahead. Movement on the far-curve was more subdued as temperatures are set to turn colder in the next few weeks.

Most contracts opened at a discount this morning as gas flows displayed another increase due to improved output via the Bacton BBL pipeline. Meanwhile, despite a slight rise in temperatures tomorrow the week-ahead forecast is still rather cold which has provided some support to contracts today. Day-Ahead power fell by £2.20/MWh this morning on the back of stronger supply, while Front-Month contracts also displayed losses. Stronger wind generation and the return of numerous power plants today led to this increase in supply. However, some near-curve contracts recorded minor gains which also trickled through to the far-curve.

Market close data has revealed that the 1-year forward price for commercial gas fell slightly, while commercial electricity was unchanged - closing at 55.05ppt and £50.20/MWh, respectively. This can be seen in the graph below. 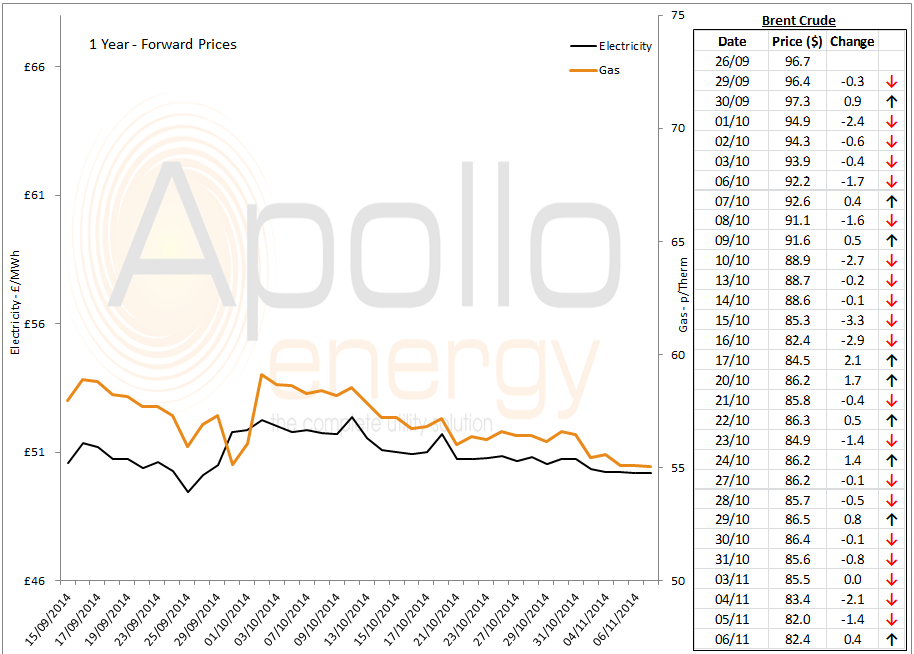 Brent 1st-nearby prices climbed higher yesterday afternoon and WTI displayed a strong gain on the back of the latest EIA report which showed that crude oil levels are lower than anticipated.