Spot power prices have recorded small gains this morning as traders expect a rise in heating demand at the end of the week and bullish gas is also helping to push prices higher. However, overall fundamentals are healthy and mild weather is expected to return next week so the current upward trend is expected to be short-lived. The UK gas system was over-supplied yesterday as Norwegian imports via the Langeled pipeline improved and exports were reduced, helping to correct the morning's gains.   Gas demand is set to increase in the coming days, supporting the majority of prices this morning despite comfortable supply. The overall outlook is rather stable as demand levels are set to return to normal next week and the British Pound continues to strengthen. Today's prices can also be found in an easy to read table on our 'current UK energy price' page.

A lot of Monday's gains were wiped out on Tuesday afternoon as LNG output significantly improved in preparation for a number of deliveries this week. European imports into the UK were also healthy and the British Pound has strengthened against the Euro. Power prices initially opened higher but weaker gas resulted in bearish movement across the curve in the afternoon. Seasonal contracts corrected downward on the back of a warmer weather outlook with Summer-15 shedding £0.16/MWh from its price.

Demand levels are still expected to increase slightly over the next few days despite a revised forecast and this has pushed the majority of gas contracts higher. Movement further along the curve was minimal as falling Brent and a strong British Pound restricted any upward movement. Day-Ahead power decreased as a result of a strong wind generation forecast, with peak levels of around 6GW expected over the next few days. Meanwhile, temperatures have been revised higher and the coming days are set to be milder than expected. Despite this, some contracts have moved higher this morning and have followed their gas counterparts.

Market close data has revealed that the 1-year forward price for commercial gas increased while commercial electricity recorded a small loss - closing at 47.18ppt and £44.20/MWh, respectively. This can be seen in the graph below. 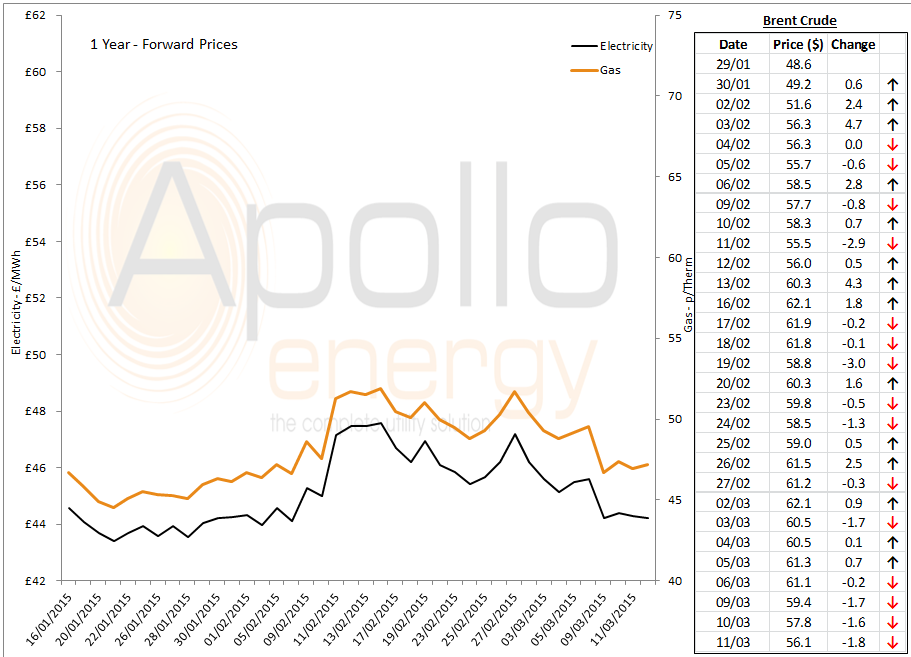 Brent 1st-nearby prices continue to plummet with a loss of over $1.7/b recorded overnight; Brent currently trades at $56.06/b.