Spot prices continue to look bearish especially in France as lower demand is expected in the coming days and consumption will go down. There have been fewer outages in Germany and France as of late and a nuclear plant that went offline on Tuesday evening became functional again by Wednesday morning. Low renewable energy production could affect prompt contracts although improved thermal energy production will reduce the chance of week and month-Ahead prices becoming higher in the next few hours.

Day-Ahead gas saw a drop of 1.30ppt from yesterday's opening price which was 71.8ppt with an increase in gas flows and a better LNG outlook playing its part in the currently bearish market. The near curve showed small losses with not much change in opening prices and closing prices, Front-Month contract closed at 67.95ppt, a rise of 0.25ppt. The Front-Month for power saw a small increase of £0.10/MWh while far curve contracts dropped; Winter-13 fell to £56.0/MWh and showed a similar loss to gas contracts. The near curve also saw a loss due to an increase in wind power being predicted, warmer temperatures and good news regarding the Hunterson nuclear reactor restarting sooner than anticipated.

Day-Ahead gas was around 2ppt down from yesterday's closing price and the prompt opened long for the 6th session in a row. W-13 dropped 0.05ppt and LNG flows were double what they were yesterday with two more vessels expected to arrive in South Hook in the next few days. The Rough storage facility is still offline due to maintenance and it is expected to remain offline till Friday. Day-Ahead power was down to £52.65/MWh helped by an increase in wind generation and the Friday discount still being applied. May-13 changed by £0.05MWh but there wasn't much change along the curve even though Brent saw a loss of nearly 1$/bbl due to lower demand expected in Europe.

Market close data has revealed that 1-year forward prices for commercial gas and commercial electricity showed gas making a slight gain and power dropping slightly - closing at 68.83ppt and £53.31 respectively. This can be seen in the graph below. 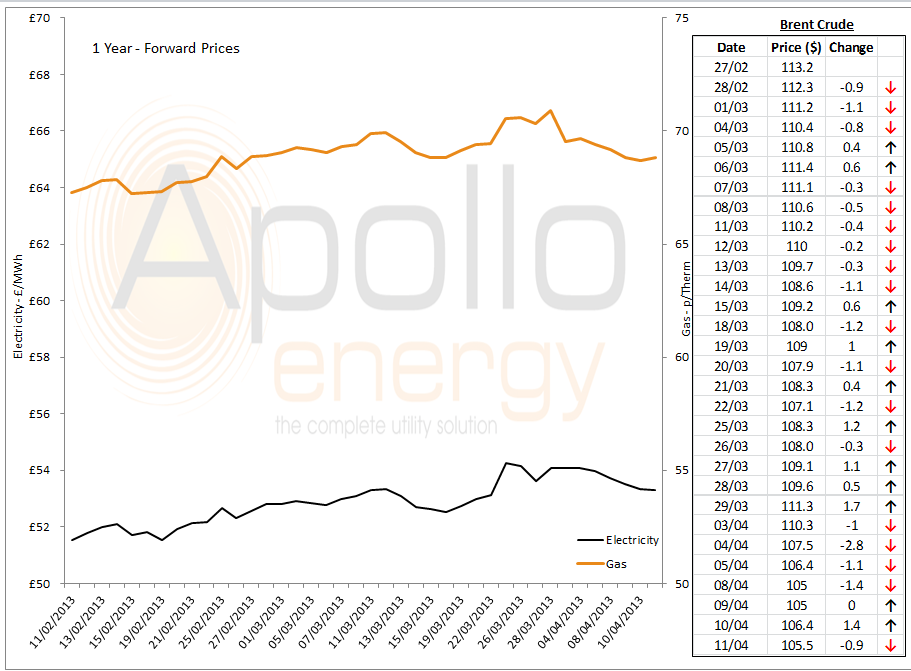 Brent prices saw a small drop as opposed to WTI prices which saw gains despite Cushing oil inventories going up. US heating oil and gasoline prices saw a sizeable drop as a consequence of the recently released EIA report. The financial markets continue to have an optimistic outlook and a Saudi senior official expects prices to remain around 100 $/b while the oil market remains balanced.