Spot prices climbed higher yesterday on the back of reduced nuclear availability, a decline in wind generation and colder weather. Today should see little change to fundamentals therefore prices are expected to hold firm today. Gas prices fell yesterday as the UK gas system was well-supplied despite an increase in demand. Today UK LDZ demand is around 232mcm; close the seasonal average and is at its highest level since the start of December. Gas flows in general should remain healthy, helped by a rise in LNG send-outs and storage withdrawals; the UK gas system is over-supplied as a result which should weigh on prices today. Today's prices can also be found in an easy to read table on our 'current UK energy price' page.

Gas contracts fell once again yesterday with Day-Ahead closing at a 0.25ppt discount and February-13 lost 0.35ppt. The UK gas system reached 13mcm long despite a small drop in Rough and Interconnector flows. The bearish sentiment continued on the far-curve with Front-Season decreasing by 0.30ppt and Winter-15 shedding 0.10ppt. Day-Ahead power ended the session at £51.25/MWh after making a series of gains throughout the day. The nuclear unit at Heysham returned online on Friday afternoon but quickly went offline again and isn't expected to return for two weeks. The rest of the curve took direction from gas and ignored bullish prompt prices, Front-Month fell by £0.15/MWh and March-14 registered a £0.20/MWh loss.

The UK gas system opened 12mcm long this morning despite flows via the Bacton interconnector falling to 0mcm. Temperatures are expected to rise to 9 °C tomorrow which helped Day-Ahead fall by 0.30ppt, while a weaker British Pound helped the rest of the curve move higher. Falling Brent helped limit the losses with Winter-14 only moving down by 0.10ppt and Front-Month opening 0.30ppt lower. On the power curve, Day-Ahead opened at a £3.80/MWh discount as wind generation is expected to ramp up tomorrow. The rest of the curve displayed a number of small gains and took some direction from gas.

Market close data has revealed that the 1-year forward price for both commercial gas & commercial electricity decreased- closing at 66.27ppt and £51.58/MWh, respectively. This can be seen in the graph below. 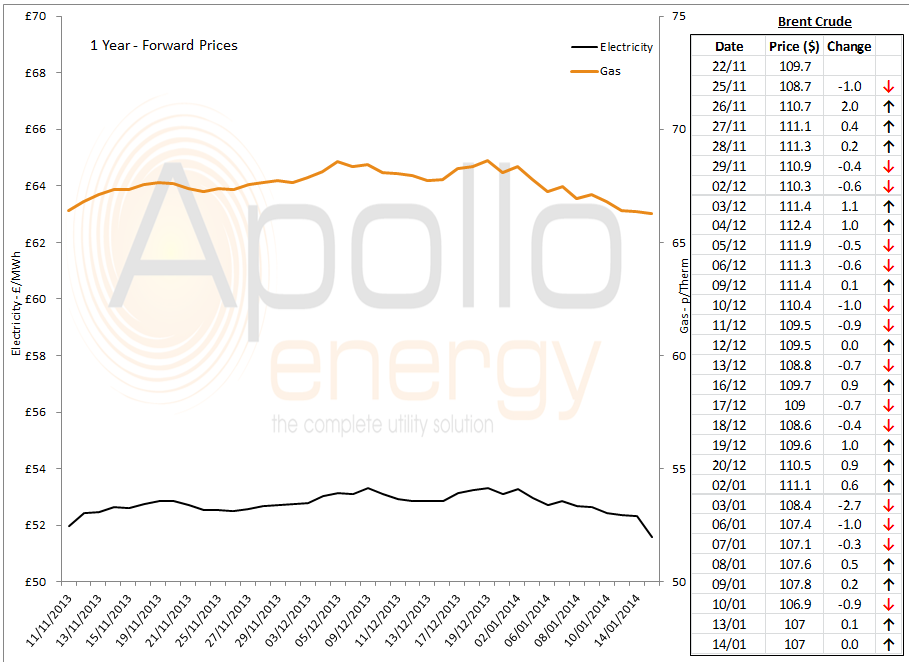 Brent 1st-nearby prices recorded a $0.50/b loss yesterday and fell below $107/b, improved supply levels in Libya and expected shipments from Iran helped prices move down.