Spot power prices were pushed higher by a colder weather forecast and a drop in German wind generation yesterday. Today's outlook is generally stable but prices correcting downwards is a possibility following numerous gains at the start of the week. Gas prices displayed gains yesterday due to higher demand levels which was the result of temperatures being in-line with the seasonal norm. The majority of outages which occurred in Norway have been resolved but a rise in heating demand is expected to push prices higher today. Today's prices can also be found in an easy to read table on our 'current UK energy price' page.

The gas curve continued on an upward trend on Tuesday as a colder weather forecast dictated prices. Upward movement was prominent across the curve despite an increase in Langeled flows following a number of Norwegian gas facilities returning online. Power prices also ended yesterday's session at a premium as higher demand, as a result of colder weather is expected until the middle of February. Brent continued to weaken but coal prices and carbon emission contracts rebounded and supported the far-curve.

Gas prices moved higher once again this morning with Day-Ahead recording the largest gain of 1.95ppt on the back of increased demand and fairly weak supply. Far-curve prices failed to take influence from weak Brent and also increased. A series of minor increases were observed on the power curve this morning with Winter-16 climbing the highest, adding £0.80/MWh to its price. Stronger gas prices and a high demand forecast were the main drivers of the power market this morning.

Market close data has revealed that the 1-year forward price for both commercial gas & commercial electricity increased - closing at 47.50ppt and £45.23/MWh, respectively. This can be seen in the graph below. 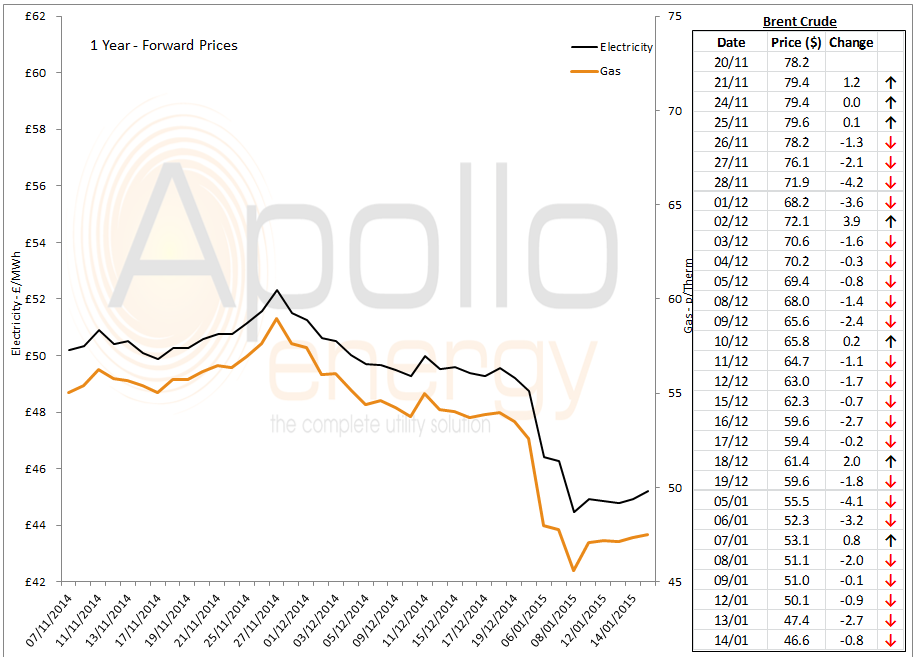 Brent 1st-nearby prices recorded another loss yesterday and displayed a decrease of around $13/b since the start of 2015 with prices closing just above $45/b.