Spot power prices continued to increase during most of Friday's session with impetus coming from rising gas and oil costs. A slight downward correction occurred this morning but further bullish movement cannot be ruled out this week. Gas prices opened higher on Friday but contracts started to decrease by the close of trading to halt a week of strong gains. The UK gas system has opened long this morning as Norwegian gas flows are steady and demand levels have fallen to 284mcm from last week's average of 318mcm; prices have moved down as a result. Today's prices can also be found in an easy to read table on our 'current UK energy price' page.

After a bullish start to the session gas prices moved down in the afternoon on Friday as the market attempted to correct itself following a week of strong gains. Meanwhile, the UK gas system was long throughout the session following increased flows via the BBL pipeline. Power prices also decreased towards the end of Friday's session and followed their gas counterparts. Ample supply helped near-curve prices to decrease with March-15 shedding £1.85/MWh from its price, assisted by milder weather.

The UK gas system has opened long again this morning as demand levels continue to decrease on the back of milder temperatures. Rising Brent has offered support to contracts further along the curve but the majority of prices have opened at a discount. Power prices have also opened lower with Day-Ahead falling by £4.80/MWh on the back of weaker demand and a stronger wind generation forecast. The rest of the curve was dictated by weaker gas with some contracts receiving support from stronger coal and oil.

Market close data has revealed that the 1-year forward price for both commercial gas & commercial electricity decreased - closing at 50.50ppt and £46.73/MWh, respectively. This can be seen in the graph below. 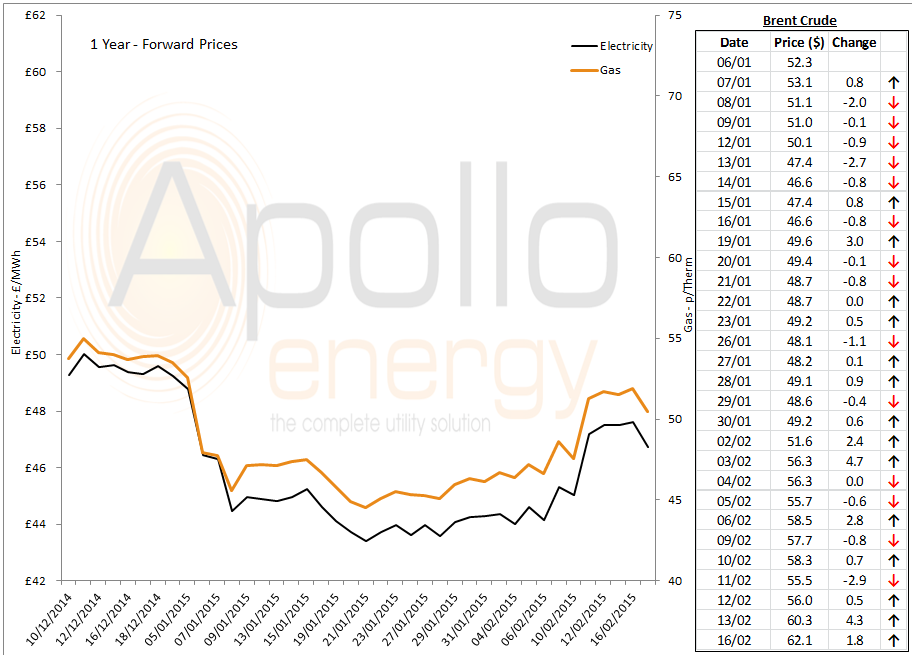 Brent 1st-nearby prices currently trade above $61/b with supply concerns in Libya and the end of the Japanese recession acting as market drivers, amongst other bullish factors.