Gas prices inched higher yesterday as a drop in overall gas flows due to reduced output from Norway and South Hook supported the bulls; scheduled maintenance also offered support. Day-Ahead closed 1.20ppt higher while Front-Month added 0.55ppt to its price. Demand levels were low due to warm temperatures and helped to restrict the gains which ranged between 0.15ppt and 0.50ppt on the far-curve. Day-Ahead power fell by £0.15/MWh and Winter-16 closed at a £0.05/MWh discount but were the only contracts to display downward movement. Rising gas and carbon prices were the main drivers of the power market on Tuesday.

Gains were seen across the gas curve this morning with Day-Ahead rising by 0.55ppt, which was the biggest mover of the day as Linepack opened 19mcm short and there was a small increase in demand. Langeled flows fell to around 14mcm at the start of the day which is a consequence of maintenance at numerous Norwegian gas fields. On the power curve Day-Ahead took direction from improved wind production and fell below £39.00/MWh. Elsewhere, gas and coal-fired generation has increased its share of the fuel mix and seasonal contracts have made gains of up to £0.40/MWh, following their gas counterparts.

Market close data has revealed that the 1-year forward price for both commercial gas & commercial electricity climbed higher - closing at 59.02ppt and £50.10/MWh,respectively. This can be seen in the graph below. 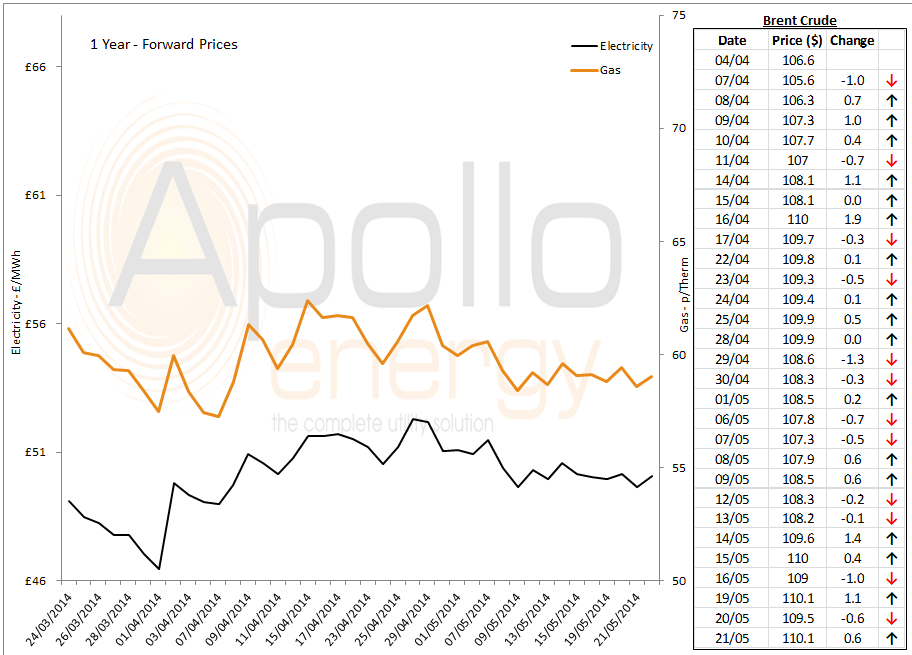 Brent 1st-nearby prices rose back above $110/b yesterday due to the on-going concerns regarding the Libyan and Ukrainian situations; meanwhile, WTI sits at around $103/b.