UK Spot power prices closed at a premium yesterday as production capacity fell to 3GW below last week's level due to reduced nuclear production caused by high temperatures across the continent. Forecasts suggest cooler weather tomorrow so markets are expected to turn bearish towards the end of the week.

The unexpected Norwegian outage continued to support NBP spot prices this morning as the UK system remains under-supplied. UK demand increased by 11mcm/day whilst flows into the St-Fergus Shell terminal dropped by 12mcm/day compared to Friday. Further out, curve contracts are expected to remain steady.

UK gas prices were supported by limited supply on Monday due to an unexpected outage at the Segal pipeline entry point. This is expected to remain out of use for 7-14 days. Centrica increased its working capacity at its rough storage facility yesterday which weighed on Winter-15 contracts.

NBP spot prices are expected to increase today as demand for storage injections and exports remains above the seasonal norm. Further support is likely to be gained from the tight UK supply picture. This is the result of reduced Langeled flows, the Norwegian outage and an unexpected outage at the Morecambe field which has halted flows to the Barrow terminal.

Day-Ahead opened at a £0.30/MWh premium this morning as warmer weather increased power consumption and supply capacity was constricted. Further out on the curve, bearish pressure persisted with Winter-15 and Summer-16 shedding £0.55/MWh and £0.35MWh, respectively.

Market close data has revealed that the 1-year forward price for both commercial gas and commercial electricity decreased slightly - closing at 43.98ppt and £43.25/MWh, respectively. This can be seen in the graph below. 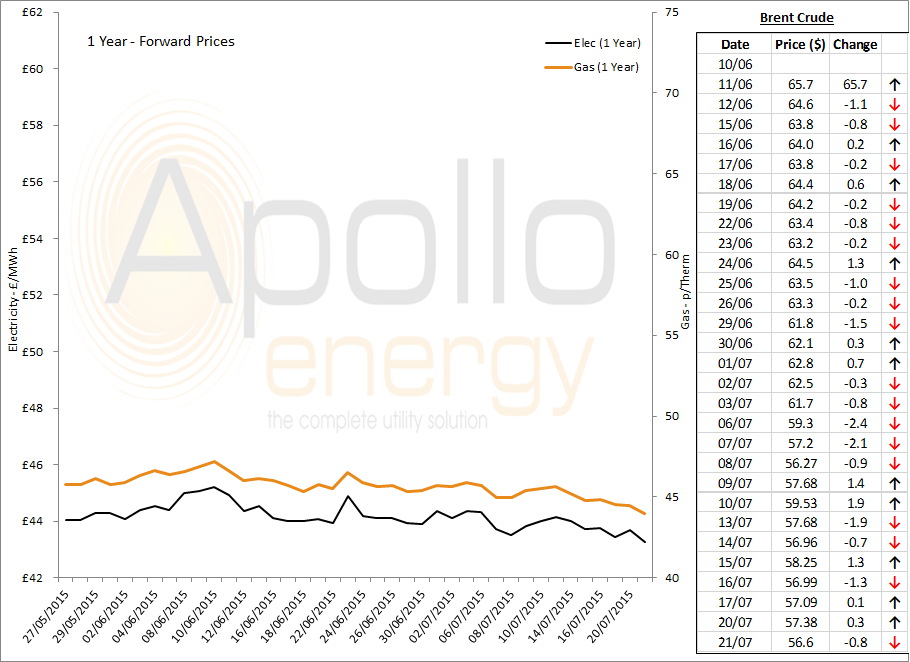 Brent Crude continued its downward trend yesterday as supply remained healthy and demand weak. New figures show that Saudi Arabian stockpiles increased 9.3Mb in May - the biggest monthly increase in 3 years. Crude markets are expected to remain steady today at around the $56-57.5/b mark.