Spot power prices have followed an upward trend for the majority of this week with influence coming from above average demand levels. However, prices are expected to move down this afternoon as European temperatures are set to improve and the weekend's wind generation forecast is strong. Gas prices were pushed higher due to rising demand levels yesterday but the losses were generally minor. Traders have some focus on a developing situation in Ukraine today and despite comfortable supply levels, prices are expected to increase. Today's prices can also be found in an easy to read table on our 'current UK energy price' page.

Most near-curve gas prices displayed a decrease yesterday as the British Pound strengthened against the Euro. Although cold weather is causing a rise in demand which offered support to prices further out. Far-curve power prices followed a similar pattern to their gas counterparts on Thursday with support coming from an announcement from the European Central Bank regarding quantitative easing.

The UK gas system opened 33mcm long this morning which weighed on near-curve gas prices and seasonal contracts. Summer-16 fell by 0.38ppt, while Winter-16 displayed a 0.35ppt price-drop. Wind generation has increased today and is expected to maintain strong levels over the weekend which has weighed on the prompt contract, ignoring strong demand. Elsewhere, movement was mixed and prices failed to follow a clear trend. 1-year forward prices Market close data has revealed that the 1-year forward price for both commercial gas & commercial electricity decreased - closing at 45.35ppt and £43.62/MWh, respectively. This can be seen in the graph below. 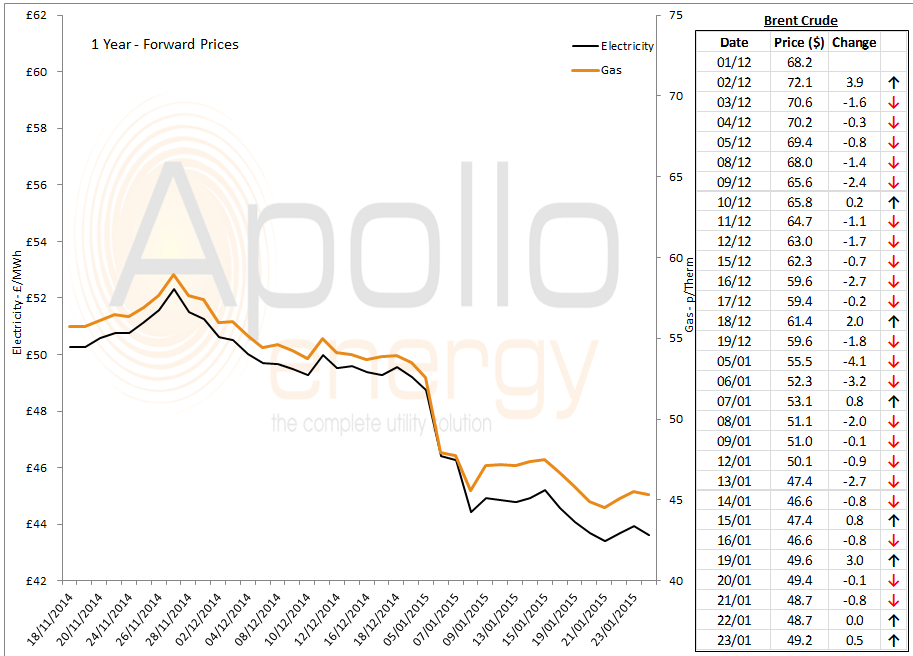 Brent 1st-nearby prices currently trade around $49/b following a slight gain during Thursday's trading session. The rebound was a result of the king of Saudi Arabia's death which should effect production in the country.