Spot power prices have displayed some upward movement this morning following a proposal released by the German government on how they can meet their 2020 carbon emission targets which could lead to some shutdowns at power plants. Gas prices moved down on the near-curve on Friday as a positive outcome to talks between Russia and Ukraine was expected, however, storage concerns in the UK supported far-curve contracts. Prices are expected to move down today as comfortable supply, scheduled LNG deliveries and a drop in demand have helped the bears take control of the curve. Today's prices can also be found in an easy to read table on our 'current UK energy price' page.

Gas contracts displayed mixed movement on Friday with on-going concerns regarding a fault at the Rough storage facility still lending support to some far-curve contracts. Meanwhile, talks between Russia and Ukraine in Brussels were expected to reach a positive conclusion, with Ukraine's current deal set to be extended. The majority of power contracts closed at a premium on Friday with Day-Ahead recording the largest gain due to a colder weather forecast. Seasonal contracts added £0.40/MWh to their price on average and followed their gas counterparts.

Most gas contracts have recorded losses this morning to cancel out some of Friday's gains with healthy fundamentals the main driver. The UK gas system has opened long as supply levels remain strong and demand levels are slightly lower. Power prices have displayed similar movement to gas this morning and have shed from their price. Day-Ahead power has opened at a £0.15/MWh discount as wind generation levels are expected to increase tomorrow.

Market close data has revealed that the 1-year forward price for both commercial gas & commercial electricity increased - closing at 47.08ppt and £44.15/MWh, respectively. This can be seen in the graph below. 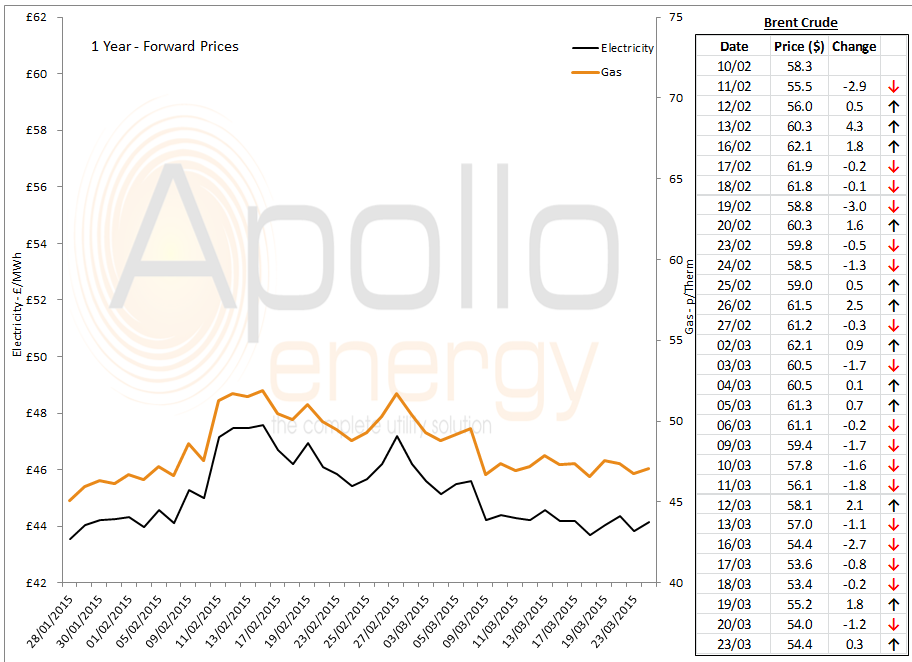 Brent 1st-nearby prices traded below $55/b over the weekend and stand at $54.36/b this morning despite a small rebound.