Spot power prices moved higher yesterday as temperatures are set to remain low across the continent for the next day or so, although bearish support will come from a rise in renewable production forecast for Thursday. Prices are expected to move down this afternoon as coal and carbon markets are set to weaken. Gas prices recorded losses yesterday despite a Norwegian facility going offline and temperatures falling in line with the seasonal average. UK LDZ demand has fallen by 3mcm today although the UK gas system has opened short due to a drop in Norwegian and BBL flows. UK temperatures are expected to rise in the next few days which should result in a further price decrease this afternoon. Today's prices can also be found in an easy to read table on our 'current UK energy price' page.

Gas contracts showed little movement yesterday with most contracts displaying a small gain. Day-Ahead climbed 0.40ppt higher as temperatures are not expected to rise tomorrow, while Winter-14 increased by 0.05ppt. The power curve took a bearish direction with Front-Month falling by £0.25/MWh and Winter-14 closing at a £0.20/MWh discount; a drop in carbon prices was thought to be the main driver. Day-Ahead was the exception and rose by £0.80/MWh as a decrease in wind generation is forecast for today.

Gas prices followed a downward trend this morning despite the UK gas system opening short due to reduced flows from Norway. Langeled flows were reduced by 24mcm following an outage yesterday while output via BBL fell to 13mcm. Day-Ahead shed 0.15ppt from its price and further losses were seen on the far-curve with Summer-14 falling by 0.45ppt and Winter-14 decreasing by 0.30ppt. In terms of power, most contracts moved down particularly on the near-curve as Day-Ahead registered a £0.25/MWh loss despite low wind generation. Monthly contracts also opened at a discount due to healthy supply levels while seasonal contracts took direction from weaker coal and carbon contracts.

Market close data has revealed that the 1-year forward price for both commercial gas & commercial electricity decreased slightly - closing at 59.94ppt and £48.25/MWh, respectively. This can be seen in the graph below. 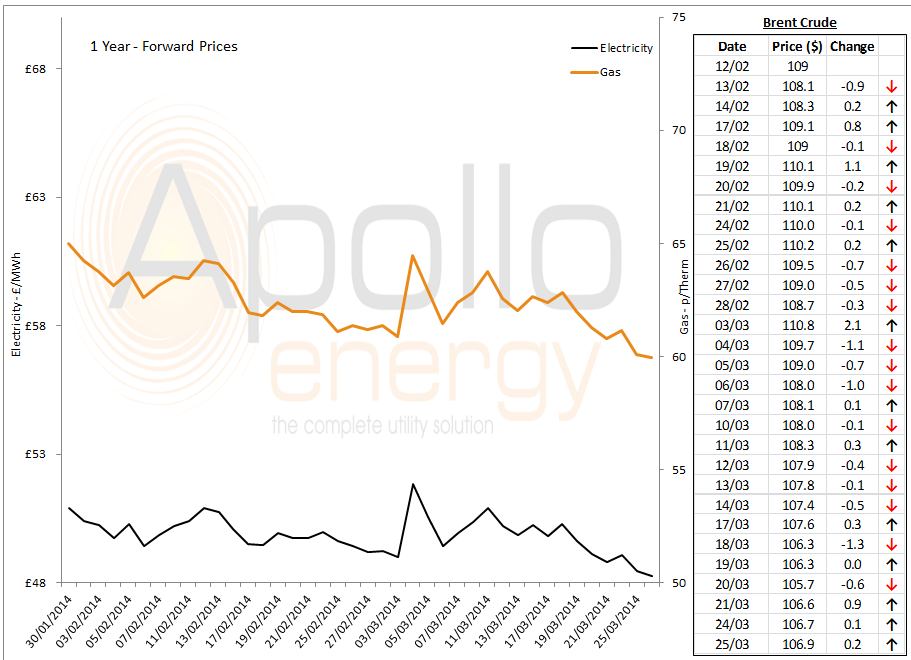 Brent 1st-nearby prices failed to move higher yesterday and have opened at around $106.5/b this morning; prices are expected to keep within the $106-$108/b range for the rest of the month.