Spot power prices recorded further losses yesterday following a revised weather forecast which has predicted warmer temperatures for the beginning of March; weaker carbon and coal contracts are also playing their part in pushing prices down this morning. Gas prices decreased yesterday despite a drop in Norwegian imports; however no storage withdrawals were required as a result of this drop in supply. Flows into the UK have improved this morning and the short term weather forecast is rather mild which could lead to further downward movement. Today's prices can also be found in an easy to read table on our 'current UK energy price' page.

Contracts across the gas curve moved lower yesterday, with a long UK gas system helping Day-Ahead shed 0.65ppt from its price to end the session at 56.15ppt. Q3-14 recorded the biggest loss of 0.95ppt, while weaker Brent weighed on far-curve prices. Day-Ahead power failed to register any movement yesterday despite the expected drop in wind generation today. Further along the curve the majority of contracts decreased in price, some by as much as £0.80/MWh.

The UK gas system was balanced at the start of today's session which led to Day-Ahead opening unchanged. Further losses were observed on the rest of the curve with Winter-15 falling by 0.40ppt on the back of the revised weather forecast. On the power curve most contracts opened at a discount although Day-Ahead rallied £1.30/MWh higher as a result of reduced wind generation. Far curve contracts fell by as much as £0.50/MWh and carbon prices also opened significantly lower.

Market close data has revealed that the 1-year forward price for both commercial gas & commercial electricity decreased - closing at 61.19ppt and £49.20/MWh, respectively. This can be seen in the graph below. 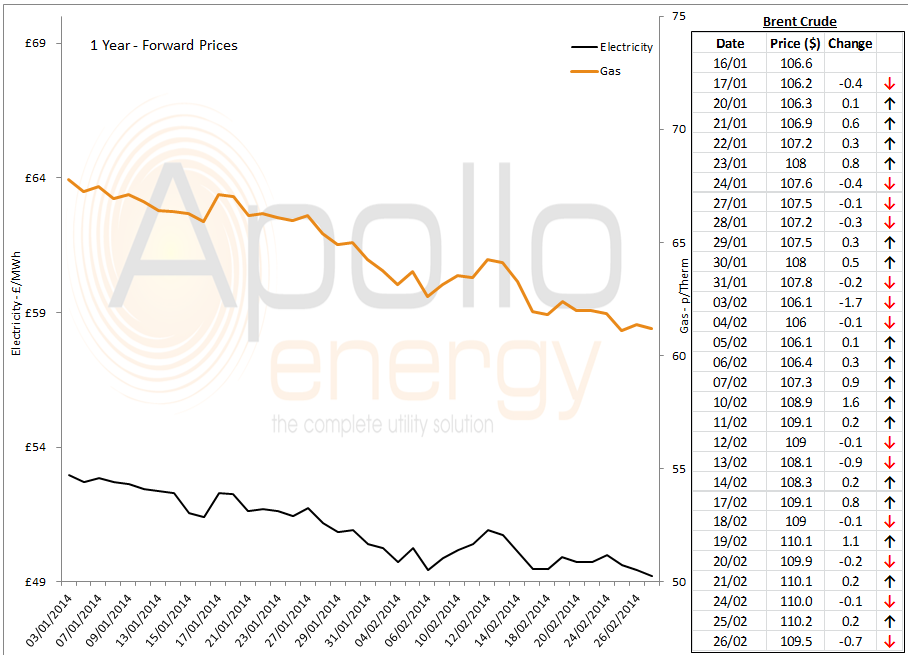 Brent 1st-nearby prices and WTI fell by around $1/b following an increase in crude stocks and an improved US weather forecast for March.