Spot power prices recorded strong gains yesterday morning but eased later in the session on the back of an improved wind generation forecast. However, today's outlook is bullish as power prices track the movement of the rising gas market. Gas prices moved down as yesterday's session progressed, as demand levels were weaker and supply was comfortable, with Langeled output increasing to 55mcm. Fundamentals are largely unchanged this morning but a 25% reduction in storage levels at Centrica's Rough facility is expected to be announced today; pushing prices higher. Today's prices can also be found in an easy to read table on our 'current UK energy price' page.

The majority of gas contracts posted small losses yesterday despite the UK gas system opening short due to a higher number of exports. Bearish pressure came from an increase in flows via the Holford pipeline as Norwegian output ramped up. Day-Ahead power decreased as a result of mild weather and a stronger wind production forecast for today. However, temperatures are expected to turn colder next week and this has offered support to some contracts.

Next week's colder weather forecast has helped some contracts add to their price this morning but today's main driver is the on-going situation at the Rough storage facility. An announcement is expected to be published by Centrica today and traders expect a 25% cut in storage capacity to be confirmed. In terms of power, demand levels are expected to be unchanged tomorrow and wind production should also remain healthy. However, stronger gas has dictated the movement of most contracts and gains have been registered by across the curve.

Market close data has revealed that the 1-year forward price for both commercial gas & commercial electricity increased - closing at 48.98ppt and £45.75/MWh, respectively. This can be seen in the graph below. 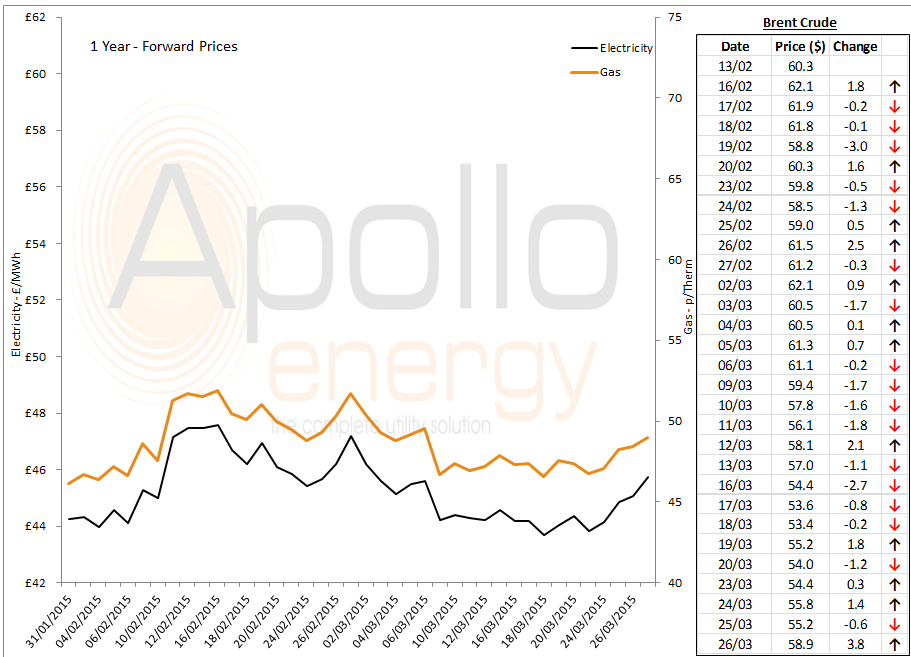 Brent 1st-nearby prices recorded significant gains yesterday and climbed towards $60/b before dropping back to around $58.5.b. The bullish movement is a result of military movement in Yemen, following the launch of a Saudi Arabian operation to help protect oil transit points in the country.