Spot power prices displayed gains yesterday as a nuclear reactor in France went offline and renewable generation remains low. Prices recorded a small loss this morning following a slight increase in supply and contracts are expected to stabilise this afternoon. Gas prices dropped yesterday ahead of the new gas year and with further influence coming from improved Norwegian supply. The new gas year begins today and overall gas flows are reduced which has led to bullish movement across the curve. Today's prices can also be found in an easy to read table on our 'current UK energy price' page.

The previous gas year traded in its final session yesterday with the then Front-Month contract closing at its lowest price for some time. Day-Ahead ended the session at 49.40ppt in a generally stable session following a healthy supply/ demand picture. Day-Ahead power closed at £43.60/MWh in a bullish session dictated by stronger carbon contracts and low renewable production. Temperatures were revised slightly higher with a milder October expected which helped to limit some gains.

Short-term temperatures are forecast to be milder than previously anticipated and this has helped to weigh on near-curve gas prices. In the first trading session of the new gas year the losses ranged from 0.30ppt for Winter-16 to 2.10ppt for Day-Ahead. The gas system was close to balance this morning with flows largely unchanged; Langeled output currently stands at 42mcm. Wind generation is expected to rise from 2.3GW to 2.7GW tomorrow but despite this, Day-Ahead climbed £0.80/MWh higher and took direction from gas. Gains were prominent across the curve with contracts rising by as much as £0.65/MWh on the far-curve.

Market close data has revealed that the 1-year forward price for both commercial gas & commercial electricity climbed higher - closing at 59.13ppt and £52.25/MWh, respectively. This can be seen in the graph below. 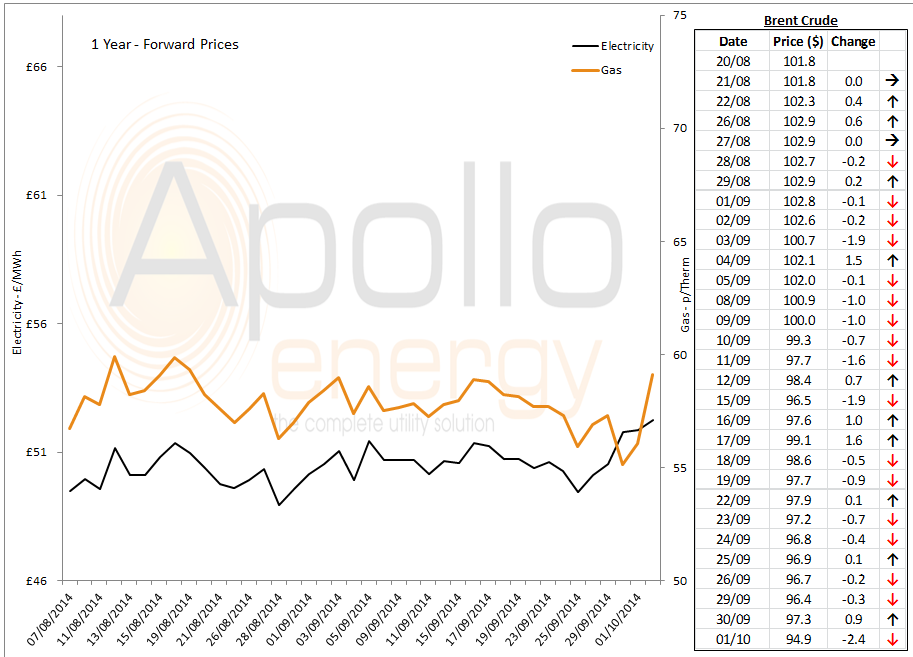 Brent 1st-nearby prices fell to their lowest point since June 2012 yesterday afternoon, falling by more than $2/b. Brent now trades below $95/b while WTI stands around $91.5/b following a loss of $3.4/b.