Spot power prices were lower by the end of Friday's close and the downward movement is expected to continue at the start of this week. The general outlook for power contracts is bearish with little support coming from fuel prices. Gas prices moved higher on Friday on the back of colder weather and weaker output in Norway and Holland. Langeled and BBL flows have improved today, helping towards a comfortable UK gas system; with UK production also higher. Price drops are expected this afternoon due to this healthy supply picture. Today's prices can also be found in an easy to read table on our 'current UK energy price' page.

Some gas prices weakened on Friday with far-curve contracts taking direction from falling Brent which dropped below $90/b. However, near-curve contracts were influenced by a colder weather forecast for this week which will result in increased demand. Power prices displayed a series of losses on Friday with the exception of Day-Ahead which climbed higher on the back of maintenance at nuclear power plants. Far-Curve prices also moved down with direction coming from weaker gas and coal contracts.

Most gas contracts recorded losses this morning as overall gas flows have grown by 35mcm; with Norwegian output rising by 20mcm. Another round of trilateral talks between Russia, Ukraine and the EU are set to commence on the 21st October which will have an impact on the short term market. Day-Ahead power fell by £0.75/MWh to trade at £46/MWh this morning, bearish pressure was provided by a healthy supply picture and weaker fuel prices. Meanwhile, a colder weather forecast has helped to limit the losses on the far-curve.

Market close data has revealed that the 1-year forward price for both commercial gas & commercial electricity recorded a loss - closing at 57.20ppt and £51.10/MWh, respectively. This can be seen in the graph below. 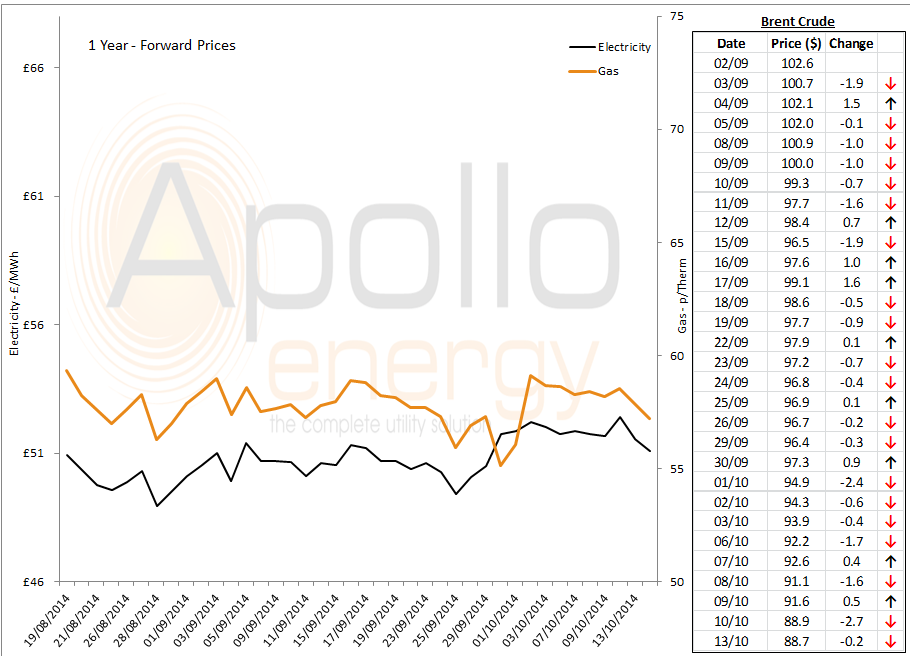 Brent 1st-nearby prices remain very low and posted a $2/b loss over the course of last week; currently trading just below $89/b. Saudi Arabia and Kuwait both announced that they plan to maintain their market share by keeping the price of their oil low, providing significant bearish pressure.