Spot power prices displayed little movement on Friday with most contracts showing a small loss as temperatures were set to improve this week. A few near-curve contracts could find support from a drop in wind generation levels and some bullish movement is likely. Gas prices moved down by the end of Friday's session as demand levels were forecast to drop this week and supply levels were healthy. However, a revised weather forecast predicts below average temperatures this week which has supported gas prices despite strong supply. Today's prices can also be found in an easy to read table on our 'current UK energy price' page.

The majority of gas contracts displayed a loss on Friday as European temperatures were set to increase this week, thus lowering demand. Elsewhere, LNG flows were strong with further deliveries expected this month helping towards a comfortable supply picture. Power prices were also on the decline on Friday with influence coming from weaker gas and Brent. The warmer weather forecast also provided bearish pressure although seasonal contracts displayed little movement with Winter-15 falling by just £0.05/MWh.

The gas curve has moved higher this morning following a revision in temperatures, with slightly below average weather forecast for this week. This should result in higher heating demand which has supported the majority of the curve, although weaker Brent has limited some upward movement on the far-curve. Power prices have followed gas and recorded gains with the colder UK weather forecast the main market driver. Similar to gas, weaker fuel prices have restricted some bullish movement on the far-curve, while lower wind generation has supported the prompt.

Market close data has revealed that the 1-year forward price for commercial gas increased slightly while commercial electricity held its price - closing at 47.38ppt and £44.20/MWh, respectively. This can be seen in the graph below. 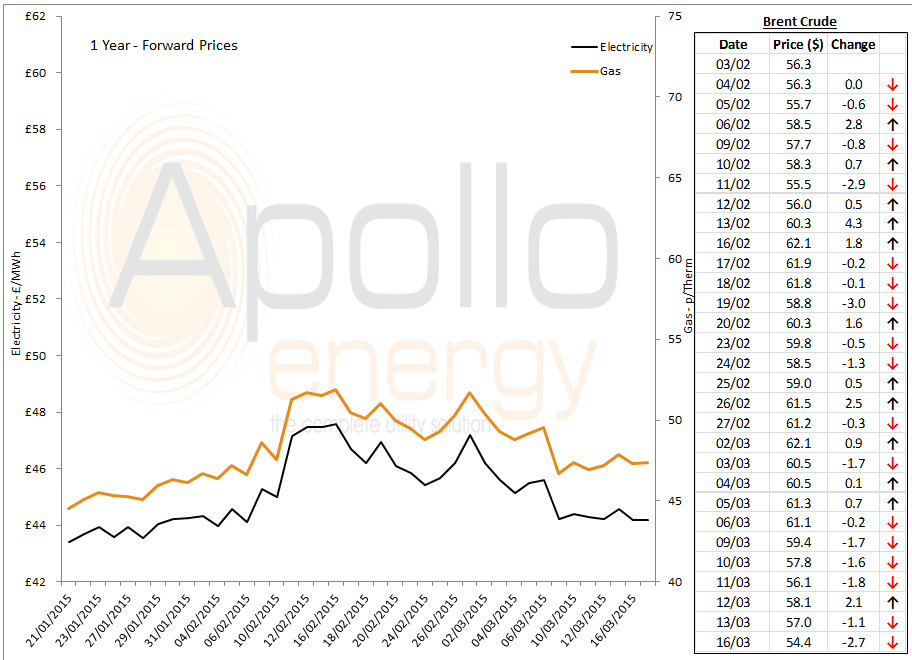 Brent 1st-nearby prices continue to decrease and have now fallen to just above $54/b on the back of global oversupply.