The weekend saw improved thermal generation while temperatures are also forecast to be milder this week. Wind generation is also expected to rise today but could fall tomorrow and Wednesday, resulting in higher spot prices. Demand levels are forecast to be lower at the start of this week which helped gas prices fall on Friday despite reduced Norwegian output. Today UK LDZ demand has increased by 2mcm and is currently 17.8% below the seasonal average as temperatures should remain mild; gas prices are expected to decrease as a consequence. Today's prices can also be found in an easy to read table on our 'current UK energy price' page.

The majority of contracts on the gas curve moved higher on Friday with Day-Ahead adding 0.10ppt and some contracts rising by as much as 0.50ppt. The system became balanced in the afternoon but shortened again an hour later as LNG flows and storage withdrawals fell. The power curve also registered gains on Friday as Day-Ahead increased by £0.25/MWh due to a lower wind generation forecast. Front-Quarter recorded the largest movement and opened at a £0.50/MWh premium on the back of stronger APi2 coal prices.

Day-Ahead gas rose by 1.20ppt with lower LNG flows and reduced storage withdrawals supporting the bulls. Brent prices climbed higher due to tensions in Libya which also helped prices rise, although the gains were less prominent further along the curve. The power curve took influence from gas with Day-Ahead opening £3.95/MWh higher due to a low wind generation forecast for tomorrow. January-14 rallied £0.10/MWh and Winter-15 increased by £0.30/MWh with stronger Brent prices also adding support.

Market close data has revealed that the 1-year forward price for both commercial gas & commercial electricity climbed higher - closing at 68.26ppt and £53.15/MWh, respectively. This can be seen in the graph below. 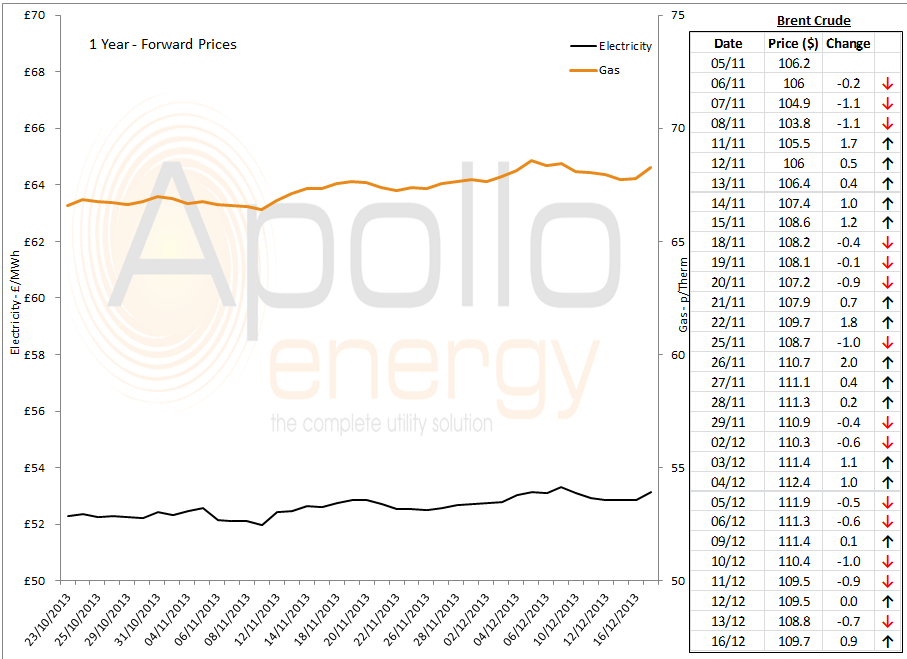 Brent 1st-nearby prices were relatively stable on Friday after losing -$2.78/b over the course of last week. Today prices climbed $0.80/b higher and currently sit above the $109/b mark, while WTI fell by nearly $1/b taking the spread to -$12.8/b.