Spot power prices have displayed some increases today as generation levels are set to decrease over the coming days.

Wind generation is set to fall and remain quite low until mid-next week, although a warmer weather forecast should result in weaker consumption. Gas flows via the Langeled pipeline were at 0mcm on Tuesday due to maintenance, which helped European gas prices to climb higher. The Langeled pipeline is back online this morning but Norwegian production remains low as maintenance is now taking place at the Ormen Lange field. However, the UK gas system is marginally over-supplied this morning despite above average demand and temperatures are set to improve in the coming days giving prices a bearish outlook.

Gas contracts displayed losses yesterday following a large increase in LNG send-outs via the South Hook terminal, with output peaking at 60mcm. Further LNG deliveries are expected before the end of the month and this has allowed for this high volume of send-outs. Maintenance in Norway failed to have any bullish effect on the gas curve and temperatures which are around the seasonal norm are set to return next week. Price-drops were also observed on the power curve on Tuesday as most contracts followed their gas counterparts. Above average temperatures are also expected for the start of June which helped Front-Month to close at a discount.

Gas prices opened lower this morning despite on-going maintenance in Norway as healthier fundamentals are expected. Milder temperatures are expected next week, while a healthy LNG outlook has also provided support to the bears. Power prices decreased today with a warmer weather outlook for next week and the start of June weighing on contracts. Renewable generation is set to be reduced in the next few days which has supported the Day-Ahead contract which was one of the few contracts to post a moderate increase.

Market close data has revealed that the 1-year forward price for both commercial gas & commercial electricity increased - closing at 46.33ppt and £44.48/MWh, respectively. This can be seen in the graph below. 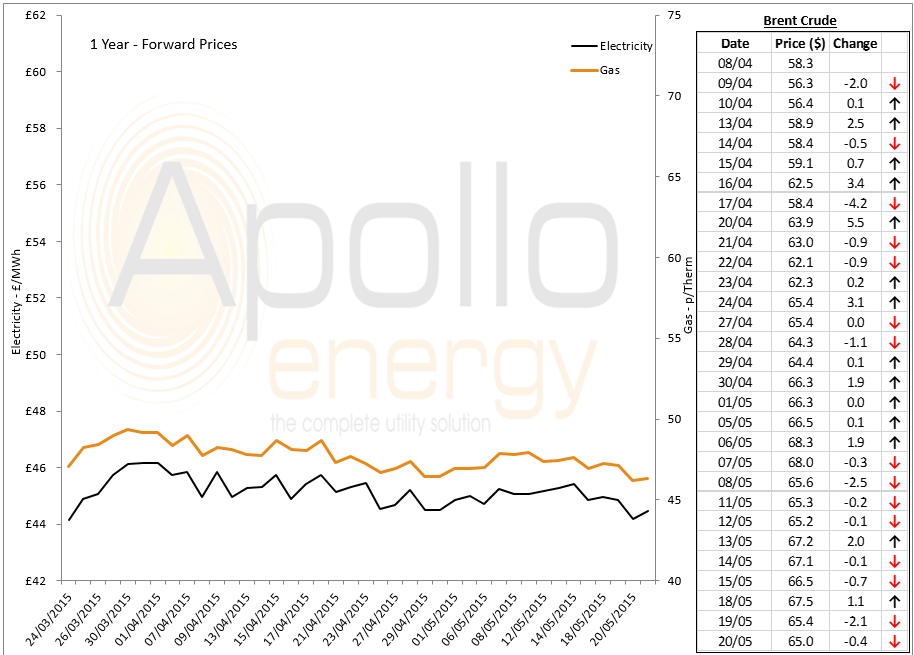 Brent 1st-nearby prices recorded a significant loss yesterday but following a small rebound they have stabilised just above $65/b. The bearish trend is set to continue in the coming days as the effects of global oversupply weigh on the market.