UK spot prices were supported this morning as mid-week temperatures are due to be significantly higher than seasonal averages. The far curve remains supported by higher clean gas costs. The Euro is also expected to rebound this week.

NBP spot prices were supported this morning by an unexpected outage in Norway which has impacted gas deliveries to the UK and means the UK system is under-supplied. Lower wind generation for today is thought to push up NBP prices as demand from gas fuelled power stations increases.

UK gas prices fell on Friday as Brent Crude dropped further and the Pound continued to strengthen against the Euro. Day-Ahead contracts gained value though as demand forecasts were revised upwards with 164mcm expected today.

As with gas, UK power prices fell on Friday as the Pound rose to a seven and a half year high against the Euro. Front-Month contract shed £0.2/MWh on Friday, closing at £41.35/MWh. Lower renewable output and increased demand supported Day-Ahead contracts.

The UK gas curve saw small gains this morning on the near curve, whilst contracts recorded some losses further out. Wind production is expected to fall today to below 1GW, down from 5GW during Friday's session. This will likely lead to increased pressure on gas fuelled power stations and so demand levels will be pushed up. The Norwegian Troll facility is expected to come out of maintenance this week which will place further pressure on the curve.

The UK power curve recorded losses across the majority of the curve this morning. Solar output is also expected to fall 0.5GW today to 2.3GW whilst peak demand is set to increase to 35.6GW, as industrial output increases for this week.

Market close data has revealed that the 1-year forward price for commercial gas increased whilst commercial electricity decreased slightly - closing at 44.47ppt and £43.70/MWh, respectively. This can be seen in the graph below. 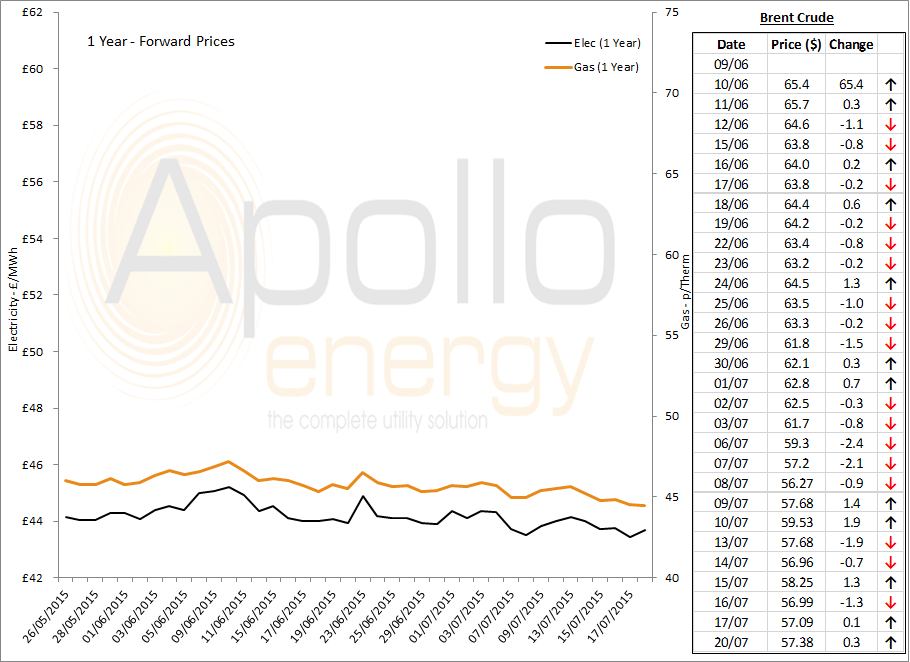 Brent Crude held its value at the end of last week, remaining at around $57/b. Brent Crude was pushed down this morning by updates that exports from Saudi Arabia have fallen to their lowest since December. Both Crude and WTI have now seen three weeks of consecutive losses.