Spot power prices were supported by weaker renewable production and a drop in thermal availability this morning. In terms of outlook, wind generation is expected to remain low today and tomorrow but the forecast for the rest of the week is rather healthy which should lead a stable market this afternoon. Gas prices fell lower on Friday with influence coming from a strong supply and demand picture. Today traders will be keeping a close eye on news regarding Russian flows via Ukraine but direction will also come from improved Norwegian flows which could result in bearish movement this afternoon. Today's prices can also be found in an easy to read table on our 'current UK energy price' page.

Day-Ahead gas closed at £44.70/MWh as renewable production remained low and Russian supply was a concern, with deliveries via Ukraine falling by 25%. Norwegian gas flows were improved but scheduled maintenance should reduce overall output this week. On the power curve Day-Ahead ended the session at £49.75/MWh with any upward movement limited by healthy supply and weaker gas. However, a drop in nuclear availability following the temporary shutdown of a unit at Dungeness provided some bullish pressure.

The gas curve opened with numerous losses this morning with Front-Month decreasing by 0.20ppt and Winter-14 shedding 0.35ppt from its price. However, a few contracts opened unchanged including Day-Ahead which kept its price of 49.75ppt. Overall gas flows have fallen slightly with Langeled output dropping to around 25mcm and BBL flows standing at 5mcm. Meanwhile, maintenance has been scheduled at several Norwegian facilities on Wednesday which should push prices higher. Day-Ahead power fell by £0.70/MWh this morning as wind production is forecast to rise over the coming week. The rest of the curve failed to display any specific trend with movement ranging from -£0.40/MWh to +£0.50/MWh. Elsewhere, wind production has doubled to take its share of the UK generation mix to 5%.

Market close data has revealed that the 1-year forward price for commercial gas showed no change while commercial electricity increased slightly - closing at 57.70ppt and £50.63/MWh, respectively. This can be seen in the graph below. 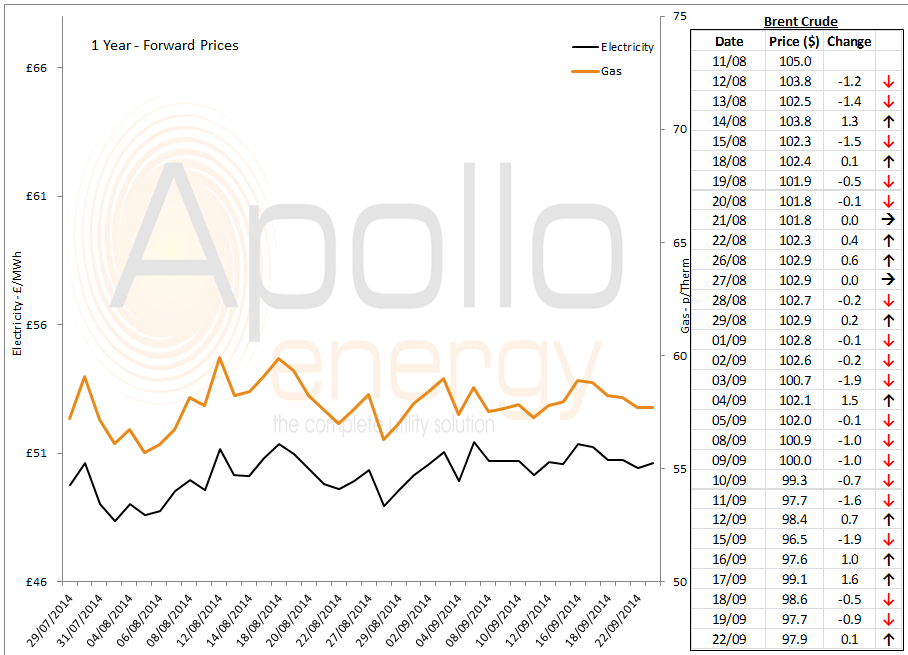 Brent 1st-nearby prices climbed higher over the course of last week but have weakened once again this morning despite rumours of a potential reduction in OPEC supply. Prices instead took direction from a stronger US Dollar and weak economic data.