Spot power prices have climbed to a two-week high over the weekend following a drop in temperatures. Contracts are expected to keep their current levels in the next few days although a substantial rise in renewable generation is forecast for Thursday. Gas prices weakened once again on Friday as the UK gas system opened long and the supply picture in general was healthy. Today UK LDZ demand has increased by 24mcm, however the UK gas system has opened long due to ample supply from Norway and strong storage withdrawals. Prices are expected to record a loss this afternoon as temperatures are forecast to improve later in the week and gas flows are expected to remain stable. Today's prices can also be found in an easy to read table on our 'current UK energy price' page.

Day-Ahead gas recorded a 0.85ppt loss on Friday on the back of a long UK gas system; displaying the largest drop of any contract by the end of the session. Monthly contracts softened by 0.20ppt while stronger Brent restricted the bears further along the curve. Power prices followed a similar trend to gas as prompt contracts displayed sizeable losses, although this downward movement was more subdued on the far-curve. Day-Ahead decreased by £0.90/MWh despite a low wind generation forecast for today while Summer-14 fell by just £0.10/MWh.

Gas contracts opened the session lower this morning as price-drops were displayed across the curve. Day-Ahead and Front-Month both decreased by 0.90ppt and took direction from a long UK gas system, despite colder temperatures expected until later in the week. Day-Ahead power opened at a £2.15/MWh discount as a result of improved nuclear availability despite lower wind generation expected for tomorrow. Further along the curve most contacts followed their gas counterparts and ignored the drop in temperatures.

Market close data has revealed that the 1-year forward price for both commercial gas & commercial electricity moved higher - closing at 60.10ppt and £48.48/MWh, respectively. This can be seen in the graph below. 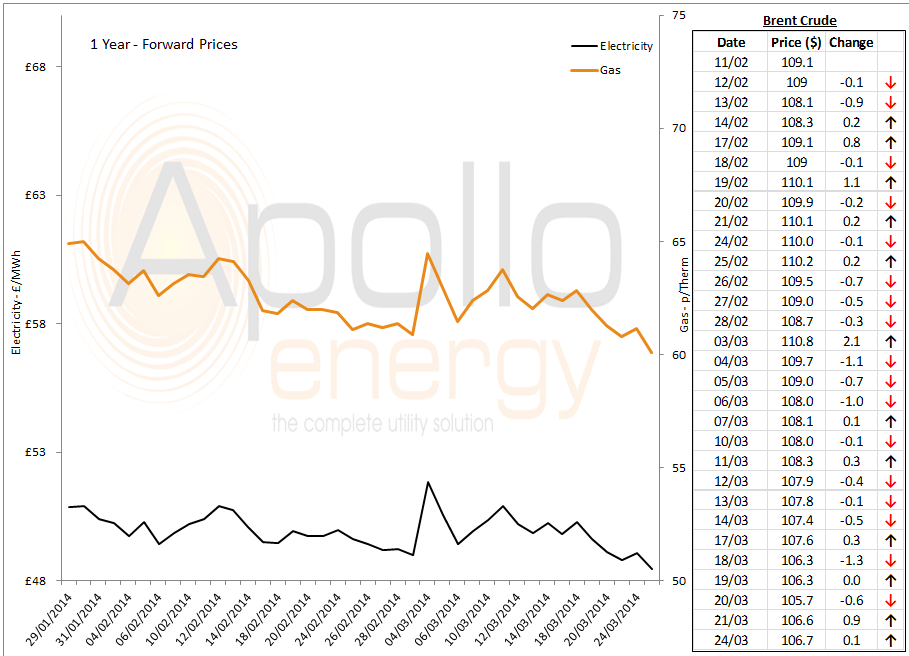 Brent 1st-nearby prices rose to $107.7/b on Friday but lost $1/b over the weekend to begin today's trading session at $106.6/b. WTI also moved down and fell below $100/b although prices could move higher today following fresh concerns in Ukraine.