Spot prices are currently dictated by weaker thermal assets and French nuclear availability is currently low as a result of two nuclear reactors having their return date postponed. Front-Month prices are expected to go up due to the forecast of low temperatures which will result in higher demand; while German nuclear generation is also expected to decrease tomorrow.

The gas curve made a series of small gains following higher demand in Belgium and an outage at a Norwegian processing plant. The system is expected to lose 27mcm because of the outage which is expected to remain offline until Saturday. Day-Ahead made a gain of 0.35ppt and closed at 62.9ppt while smaller price increases were seen further along the curve. Day-Ahead went up by £0.75/MWh to close at £49.50/MWh as power contracts added to their price on the back of numerous outages at power plants. Units at Pembroke, Aberthaw and Tilbury have all gone offline resulting in reduced clean and conventional coal availability which supported the bullish Day-Ahead contract.

Further gains were made on the gas curve today with Day-Ahead going up by 0.85ppt to open at 63.75ppt. The Zeebrugge pipeline saw exports of 39mcm and Langeled flows were at 18.5mcm with storage facilities withdrawing 39mcm to try and balance the system. Front-Month Brent also influenced the gas curve by moving up to $102.98/bbl this morning. A number of power stations are expected to reconnect to the grid at the start of next week which led to Day-Ahead opening £1.70/MWh lower ignoring the currently below average temperatures. July-13 climbed to £47.25/MWh but dropped slightly as trading began; coal generation fell to 30% despite Front-Month APi2 coal prices decreasing by $0.4/tn.

Market close data has revealed that the 1-year forward price for both commercial gas & commercial electricity went up - closing at 68.03ppt and £51.75/MWh, respectively. This can be seen in the graph below. 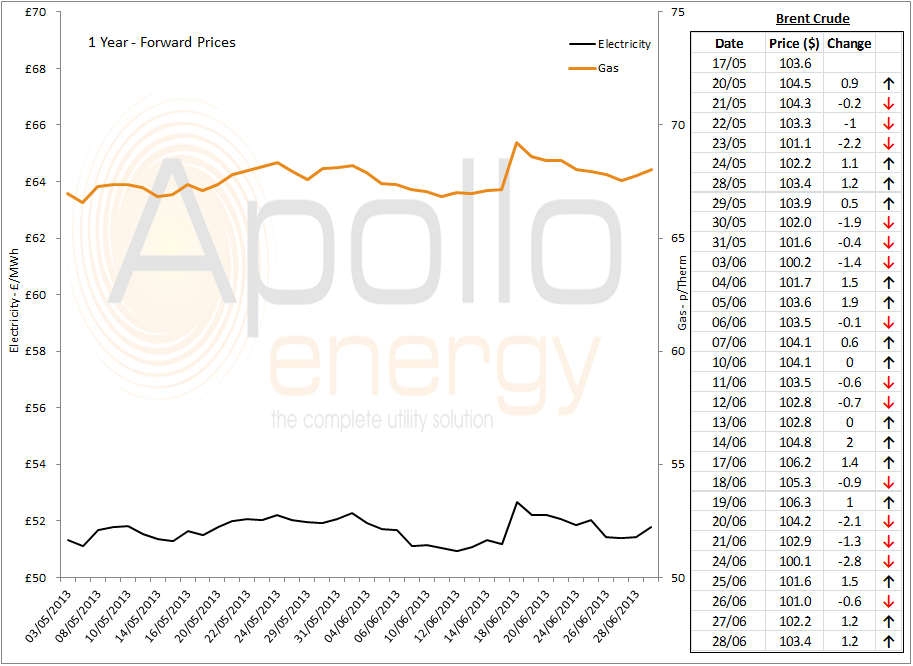