Spot power prices moved down yesterday with slightly lower consumption and an improved renewable generation forecast for Thursday a factor. However, prices have opened higher this morning with support coming from rising fuel costs. Gas prices fell lower on Wednesday following positive talks regarding Russian oil transport via Ukraine. Today has seen little change to fundamentals but NATO involvement in the Ukrainian conflict following a rise in tensions has pushed prices higher. Today's prices can also be found in an easy to read table on our 'current UK energy price' page.

Fundamentals were largely unchanged yesterday and despite opening lower, prices rallied higher by the close of the session. Day-Ahead added 1ppt to its price as Norwegian imports into the UK improved. Elsewhere, the situation in Eastern Europe offered support to front-winter contracts with October-14 climbing 0.75ppt higher. The power curve displayed mixed movement with a volatile gas market resulting in some uncertainty amongst traders. Day-Ahead rose to £38.10/MWh as UK wind generation was expected to fall today and Winter-14 increased by £0.50/MWh, taking influence from gas.

Gas prices opened at a premium this morning with some contracts rising by as much as £0.80/MWh. Yesterday's optimism surrounding talks between Russia and Ukraine was short-lived and new tensions have offered support to the bulls. Day-Ahead added 0.60ppt to its price and currently trades at 43.80ppt as the UK gas system opened short due to reduced flows from Norway. Day-Ahead power was the exception to a bullish power curve this morning as wind production is expected to ramp up tomorrow. Further along the curve contracts displayed gains of up to £0.90/MWh and took direction from gas and Eastern Europe.

Market close data has revealed that the 1-year forward price for both commercial gas & commercial electricity climbed higher - closing at 56.98ppt and £49.55/MWh,respectively. This can be seen in the graph below. 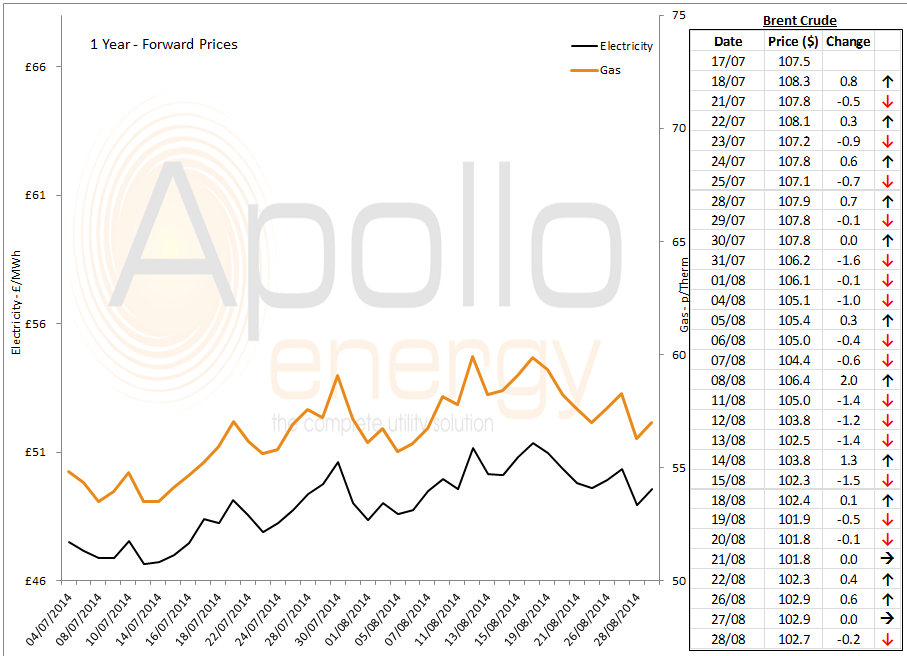 Brent-1st nearby prices have displayed little movement this morning but the Ukrainian crisis is expected to push prices up to around $103.3/b this afternoon. Meanwhile, WTI has weakened which has taken the Brent/ WTI spread to -$9/b.