Plans for the world's first tidal lagoon have been backed in a government-funded review, giving the project a major boost.

The Swansea Bay Tidal Lagoon, a £1.3bn green energy project has received the backing of a government-funded review. The scheme would have a lifespan of 120 years and would create thousands of jobs in the area.

The lagoon would harness the power of the tides in the Severn Estuary and would be the first project of its type in the world. It would consist of a U-shaped breakwater structure built out from the Welsh coast, with an array of turbines which would be turned by the tide to create electricity. 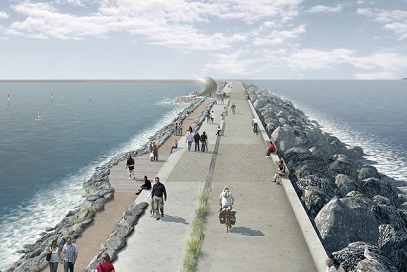 It is expected that the lagoon would be able to provide green energy for 155,000 homes, while providing a significant boost to the Welsh economy.

Tidal Lagoon Power is the firm behind the project which claims it would only require the rate of bill-payer support to fund the lagoon, the same afforded to nuclear projects; it is thought that this would cost households as little as 20p-30p on average.

The report which backs the project was compiled by the former Energy Minister, Charles Hendry who states that the scheme could play an important role in securing future power supply in the UK.

In an interview with BBC Radio 4, Hendry said: "We know it absolutely works. One of the great advantages is it is completely predictable for all time to come. We know exactly when the spring tides and neap tides are going to be every single day for the rest of time and so, in terms of meeting security of supply, lagoons can play an important role."

Former Prime Minister, David Cameron cast some doubts over the government's backing of lagoon projects due to potential costs. However, Charles Hendry said: "If you look at it over the cost of that 120 years then you get a very much lower figure than almost any other source of power generation."

It is thought that Swansea Bay would be a showcase project which could pave the way for more tidal lagoons across the UK.