Stronger wind generation and a healthier supply picture in general have helped to weigh on power prices. Carbon markets have also weakened this morning which should result in further bearish movement this afternoon. Gas prices continued their upward trend yesterday as a consequence of Russian supply concerns despite bearish fundamentals. Healthy supply levels and the tensions in Ukraine continue to cancel each other out but bearish movement is expected this afternoon as traders take direction from low demand levels. Today's prices can also be found in an easy to read table on our 'current UK energy price' page.

The gas curve displayed a bearish sentiment this morning with summer-16 and winter-16 the exception. The UK gas system opened 7mcm long which helped Day-Ahead to drop to around 37.25ppt. Gas flows are generally unchanged from yesterday but consumption levels have decreased in the UK. Wind generation is expected to ramp up to around 6GW on Monday which has provided strong support to the bears this morning; Day-Ahead fell by £2.00/MWh as a result. Front-Month also displayed a large loss of £2.10/MWh and downward movement was also displayed on the far-curve.

Market close data has revealed that the 1-year forward price for both commercial gas & commercial electricity decreased - closing at 57.80ppt and £49.58/MWh,respectively. This can be seen in the graph below. 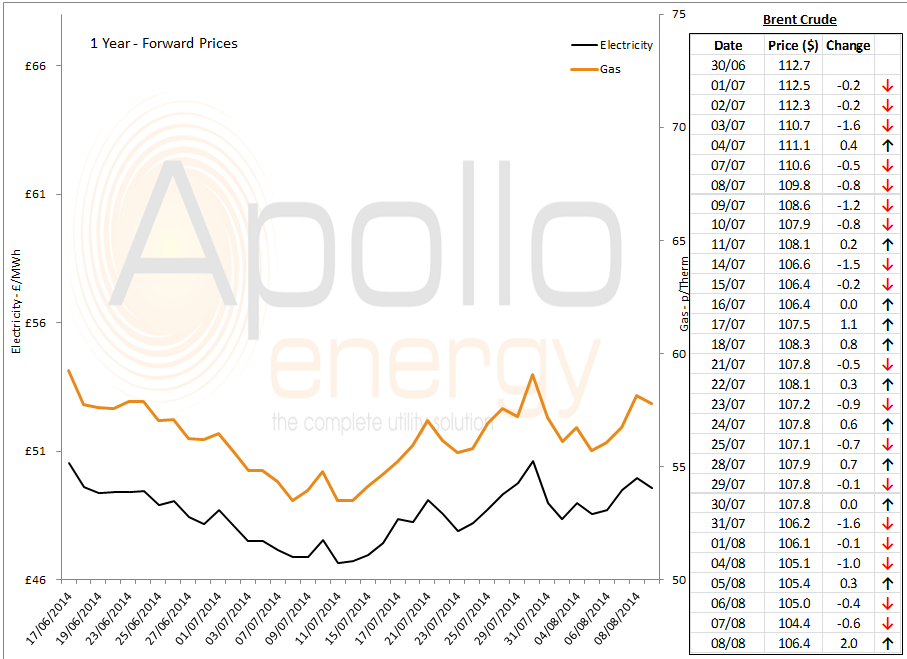 Brent 1st-nearby prices rose by around $2/b yesterday as concerns in Iraq and the on-going saga between Ukraine and Russia pushed oil prices higher.