Spot power prices have displayed mixed movement this morning as nuclear availability in France has fallen by 2GW due to outages, while wind generation has improved over the weekend; prices should stabilise this afternoon. Gas prices were dictated by healthy supply levels on Friday despite cold temperatures pushing demand higher and two outages in Norway. Demand levels are similar to Friday with little change in temperatures although slightly milder weather is expected from Wednesday which should weigh on prices. Today's prices can also be found in an easy to read table on our 'current UK energy price' page.

Two unplanned outages in Norway reduced imports into the UK on Friday but gas flows in general were quite healthy. The ample supply picture offset the effect of cold temperatures and the majority of contracts closed the session at a discount. Rising demand was offset by healthy power generation on Friday with a bearish trend displayed across the curve. Weaker gas was the main market driver although extremely low oil prices also assisted the bears.

Gas prices recorded further losses this morning with most contracts falling by just under 1ppt. Overall gas flows are generally unchanged and remain at around 33mcm although LNG output was slightly down. Langeled flows improved as the two outages that occurred on Friday were resolved, while weaker Brent weighed on far-curve contracts. Day-Ahead power opened £0.05/MWh higher despite a rise in wind generation which is expected to last until the end of the week. Further along the curve most contracts recorded losses of up to £0.50/MWh on the back of strong supply.

Market close data has revealed that the 1-year forward price for both commercial gas & commercial electricity recorded a loss - closing at 54.25ppt and £49.50/MWh, respectively. This can be seen in the graph below. 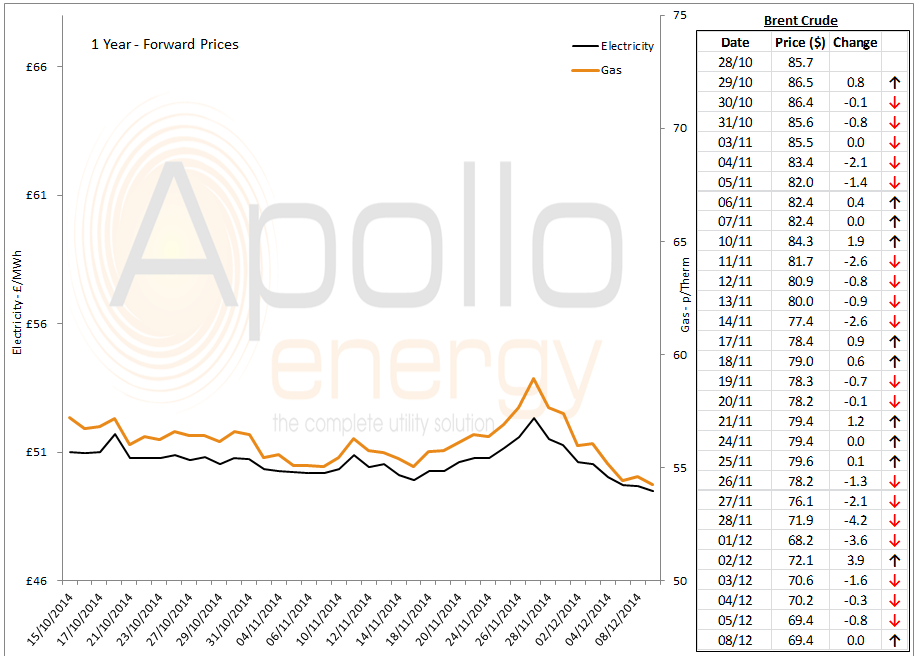 Brent 1st-nearby prices have weakened further despite supportive economic data from the US; Brent trades around $68/b at present and WTI fell by $3/b over the weekend.