Spot power prices were relatively firm yesterday as increased demand was offset by improved renewable generation. Wind generation is expected to remain low for the rest of the week but nuclear availability has improved which should lead to a stable-to-bearish outlook for prices this afternoon. The UK gas system was well-supplied yesterday despite maintenance work at a number of sites. Demand levels were also rather low due to above average temperatures but it was a weaker British Pound which dictated the market and prices moved higher. Norwegian flows have fallen by 45mcm this morning but maintenance is expected to be concluded later today. Temperatures in the UK have also been revised higher for the next two weeks but market movement will be dependent on the latest news from Ukraine. Today's prices can also be found in an easy to read table on our 'current UK energy price' page.

The UK gas system ended the session short after a morning of healthy supply as Bacton BBL flows fell by 6mcm. Day-Ahead climbed 0.10ppt higher on the back of this short supply, while coal-fired generation overtook gas in the fuel mix, restricting some near-curve gains. Wind production was low on Monday which led to a £0.55/MWh gain for Day-Ahead power, although the upward movement was limited by the return of several nuclear units. Most near-curve contracts followed their gas counterparts with the gains ranging from £0.10/MWh for Q1-15 to £0.20/MWh for November-14.

Most gas contracts decreased in price this morning with Day-Ahead falling by 0.15ppt and Front-Month opening at a 0.25ppt discount. Linepack was balanced at the start of trading as BBL flows ramped up to 23mcm and made up for a drop in Langeled output. Smaller losses were observed on the far-curve with Summer-15 and Winter-15 recording a price-drop of 0.10ppt. Gas-fired generation increased its share of the fuel-mix from 23% to 31% after reaching a four-week low on Monday. Day-Ahead opened £1.20/MWh lower as demand levels are forecast to drop and wind generation is expected to be slightly higher for the rest of the week. Movement varied on the rest of the curve with October-14 decreasing by £0.35/MWh and Winter-15 climbing £0.35/MWh higher.

Market close data has revealed that the 1-year forward price for commercial gas moved slightly higher while commercial electricity made a small loss - closing at 57.83ppt and £50.68/MWh, respectively. This can be seen in the graph below. 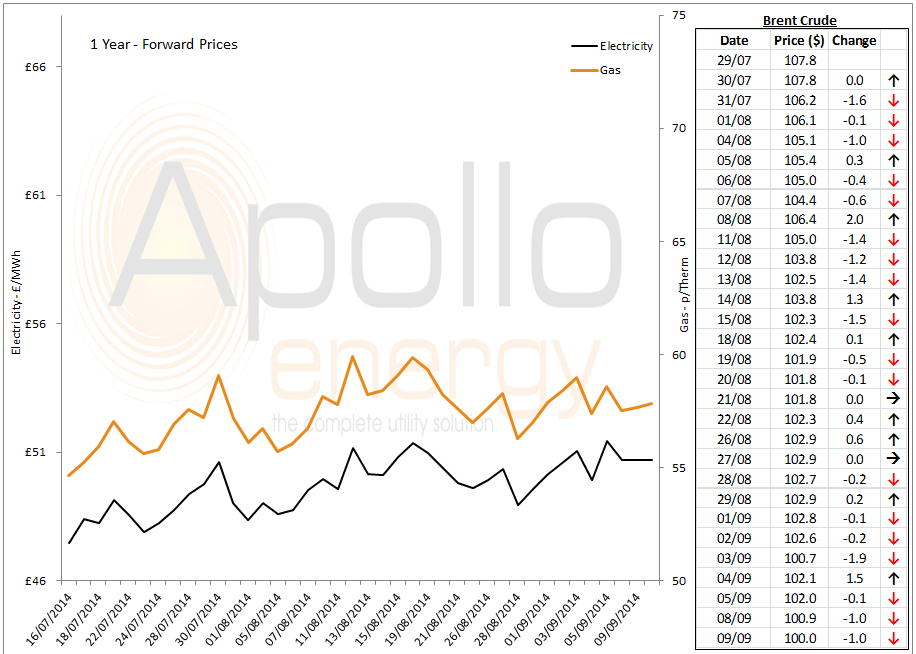 Brent 1st-nearby prices fell below $100/b yesterday for the first time in sixteen months as supply levels are strong and demand is forecast to be lower. A further drop in prices is anticipated today as the monthly EIA report is expected to display bearish fundamentals.