Spot power prices decreased yesterday morning as strong levels of wind and an expected uptick in temperatures offset lower nuclear availability. However prices rebounded in the afternoon and continued to rise this morning, taking direction from gas which has been affected by a drop in supply. Gas prices rebounded yesterday as the UK gas system fell short following a drop in Norwegian imports and strong demand. Maintenance at pipelines in Norway means the system is undersupplied this morning and an expected rise in demand should lead to gains. Today's prices can also be found in an easy to read table on our 'current UK energy price' page.

The gas curve ended yesterday's session with a series of significant gains with Day-Ahead adding 1.35ppt to its price and other contracts rising by 0.90ppt on average. The UK gas system initially opened long in the morning but fell short in the afternoon despite strong LNG send-outs. Power prices took direction from their gas counterparts in yesterday's session with some contracts rising by as much as £1/MWh. Day-Ahead was the only contract to record a loss yesterday as wind generation was expected to remain healthy.

Some gas contracts continued to climb higher this morning but overall movement varied. Monthly and Quarterly contracts ended the session at a discount but the majority of contracts recorded a small increase. Movement on the power curve was mixed this morning with Day-Ahead adding nearly £2/MWh to its price and far-curve contracts displaying only minor movement. In terms of the generation mix, wind production has grown significantly to hold a 15% share.

Market close data has revealed that the 1-year forward price for both commercial gas & commercial electricity increased - closing at 54.98ppt and £50.00/MWh, respectively. This can be seen in the graph below. 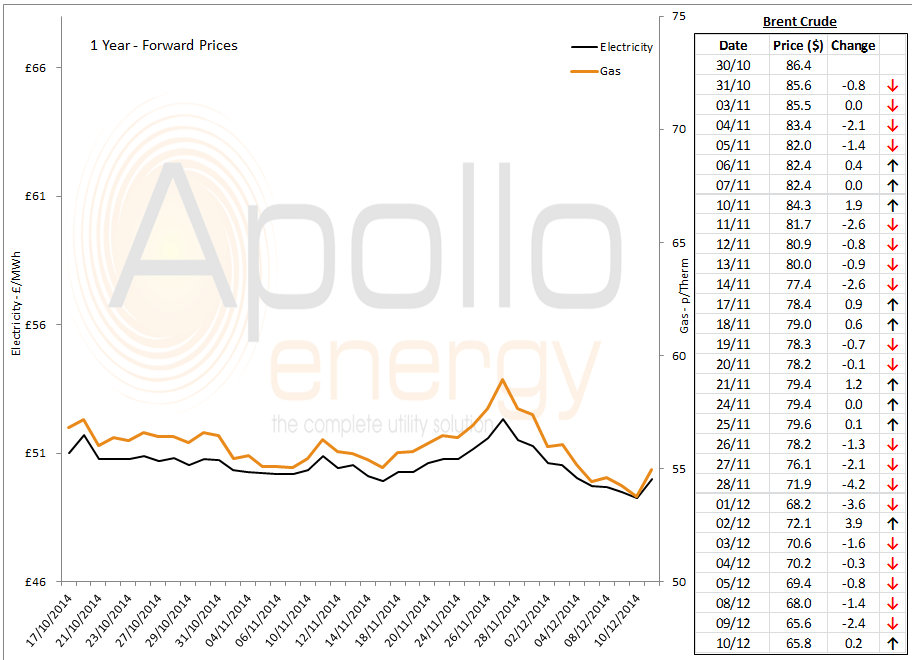 Brent 1st-nearby prices remain just below $66/b despite displaying a small increase this morning. Brent has fallen by $2.5/b since Monday's open and hit a new 5-year low in yesterday's session.