Spot prices continued to display a bearish outlook as a result of the warmer weather and a predicted reduction in consumption. March saw record-highs in terms of demand but at present we are closer to seeing record lows as temperatures continue to improve. Nuclear availability is also expected to increase over the next few days.

Day-Ahead gas fell by 0.1ppt whereas Front-Month saw a drop of 0.15ppt as the market closed with little change across the curve. Winter-13 saw a gain of 0.15ppt and Summer-14 went up by 0.2ppt showing similarities to the Front-Season Brent contracts. Storage levels were just under 10% with further LNG shipments expected. Day-Ahead power was unchanged but Front-Month went up by £0.35/MWh to close at £49.75/MWh and Front-Quarter showed the biggest drop, falling by £0.45/MWh. The power curve has been affected by the EU's vote against back-loading with most contracts making a loss despite carbon prices making slight gains.

Day-Ahead gas made a loss of 0.9ppt and Front-Month was reduced by 0.45ppt, further along the curve Summer-14 opened at 64.25ppt and Winter-14 opened at 71.3ppt. The system opened 20mcm long and flows from the Langeled pipeline went up to 63mcm although total output at the St Fergus Total terminal was around half of what it was on Friday. LNG send outs from the South Hook were at 43mcm and 5 additional cargoes are expected to arrive later in the week. Prompt Power contracts opened lower this morning showing a similar trend to the gas curve, Day-Ahead made a loss of £2.90/MWh due to healthy wind generation with a forecast of over 4.3GW. Further along the curve Winter-13 showed gains of £0.05/MWh and Summer-15 was £0.10/MWh down. Coal generation made up 40% of the fuel mix even though Front-Month API2 was higher at opening.

Market close data has revealed that the 1-year forward price for both commercial gas and commercial electricity saw a slight rise - closing at 68.30ppt and £52.23/MWh respectively. This can be seen in the graph below. 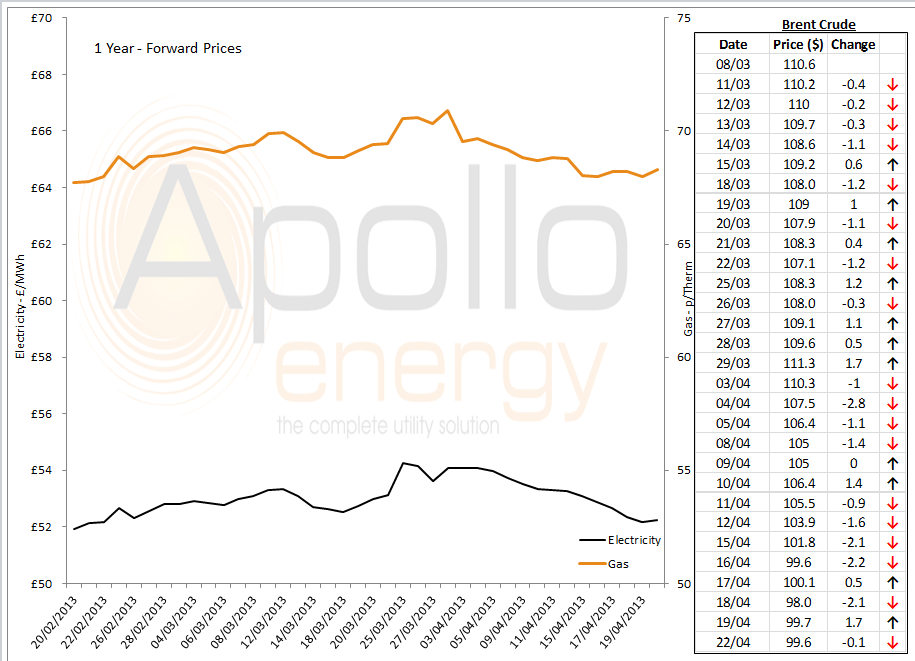 Brent prices saw a rise of 0.5 $/b on Friday but failed to break over 100.5 $/b, a rise in the gold and equity markets may have played a part in this rise although there is a lack of economic data to fully show this.

Get in touch  today to discuss your business utilities and find out how our energy broker services can help your business lower costs.