Spot power prices showed minimal movement yesterday with some contracts displaying no change and others registering a minor loss. UK temperatures remain rather mild while wind production has improved today. Gas prices were at their lowest level so far this year as demand remained low yesterday thanks to the mild weather. Today UK LDZ demand has risen by 14mcm but the UK system opened long once again thanks to strong storage withdrawals and improved BBL flows. Prices are expected to fall further today as temperatures and demand levels are not forecast to change tomorrow. Today's prices can also be found in an easy to read table on our 'current UK energy price' page.

The gas curve took a downward direction yesterday as prompt contracts fell on the back of a milder weather forecast. Day-Ahead recorded a 0.65ppt price-drop while Front-Month fell by 0.50ppt. Further along the curve the losses were not as substantial as climbing Brent added some resistance to the downward pressure. Day-Ahead power closed at a £0.30/MWh discount while February-14 and March-14 also moved down as a result of increased nuclear availability and the return of coal-fired plant. The gains recorded by Brent added some bullish pressure but contracts across the curve managed to fall.

Gas prices displayed minor movement this morning as there was little change to fundamentals with demand and gas flows close to yesterday's levels. Linepack opened long but despite this Day-Ahead could only record a 0.10ppt loss, while February-14 climbed 0.20ppt higher. Seasonal contracts followed stronger Brent prices and opened the session higher. In terms of power, Day-Ahead shed £0.70/MWh from its price this morning due to the usual drop in demand on Fridays and improved wind generation. The rest of the curve displayed no clear trend with February-14 failing to register any movement and Front-Season falling by £0.05/MWh.

Market close data has revealed that the 1-year forward price for both commercial gas & commercial electricity decreased - closing at 65.96ppt and £51.45/MWh, respectively. This can be seen in the graph below. 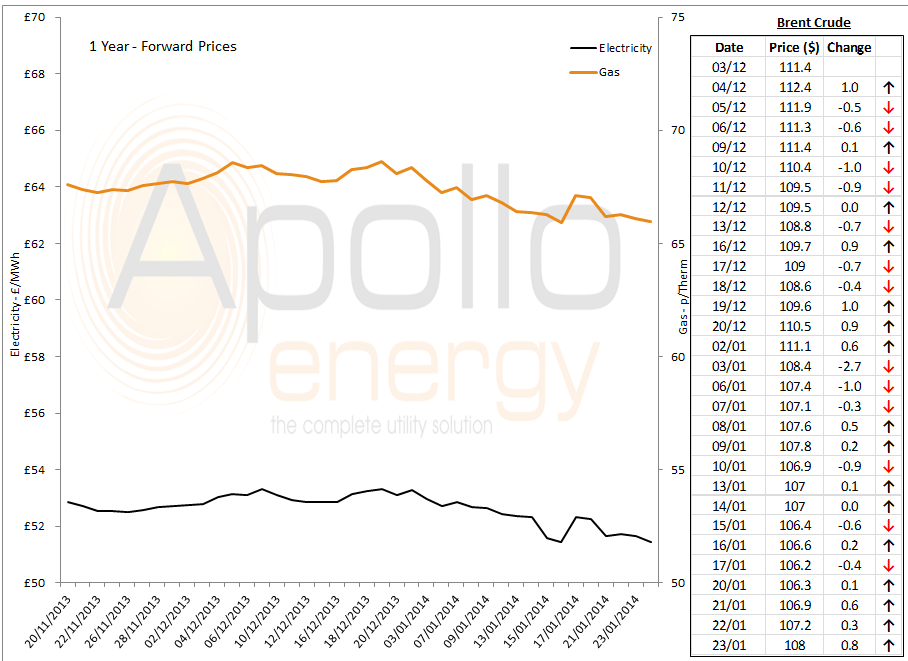 Brent 1st-nearby prices moved higher yesterday, briefly edging above the $108/b mark and now sits around that level this morning. Weak economic data from China is the main cause of the bullish behaviour with WTI also rising by $1.74/b, taking the spread to around -$11/b.