Spot prices went down slightly yesterday thanks to the usual drop in demand on Friday but supply levels are rather low at present which meant price drops were minimal. The UK gas system was tightly balanced yesterday due to a drop in BBL flows and the postponement of the Kollsnes plant's restart date. The delay at Kollsnes is expected to be the main influence on today's prices but the September-13 contract could make a loss if the facility is restarted this afternoon. Today's prices can also be found in an easy to read table on our 'current UK energy price' page.

The Norwegian Kollsnes plant had its return date pushed back yesterday and is now expected to come back online at the weekend. Holford and BBL flows saw an increase to counter the drop in Norwegian flows which helped to restrict the rise in prices. Day-Ahead rose by 0.10ppt and Front-Month went up by 0.15ppt at the session's close. The power curve showed a similar trend to gas as most contracts went up, Day-Ahead and Front-Month rising by £0.25/MWh and £0.30/MWh, respectively. A number of power plants are expected to restart over the weekend and on bank holiday although 2 nuclear plants will go offline until September for refuelling purposes.

Day-Ahead gas fell by 0.05ppt while the two Front-Months saw no change as the near-curve displayed only minor changes. Further along the curve, changes were mixed with Q4-13 going up by 0.30ppt and Winter-13 dropping by 0.15ppt. The system opened 13mcm short but is almost balanced at the time of writing as gas flows in general are healthy. Demand is predicted to be high on Tuesday following the bank holiday weekend and this has been shown in the Day-Ahead contract which has opened £0.75/MWh higher, while Monday's contract is currently trading £1.00/MWh lower. Most contracts along the curve registered a gain due to reduced coal and nuclear availability and a minor increase in wind production was ignored.

Market close data has revealed that the 1-year forward price for commercial gas went up slightly while commercial electricity made a small loss - closing at 67.15ppt and £51.20/MWh, respectively. This can be seen in the graph below. 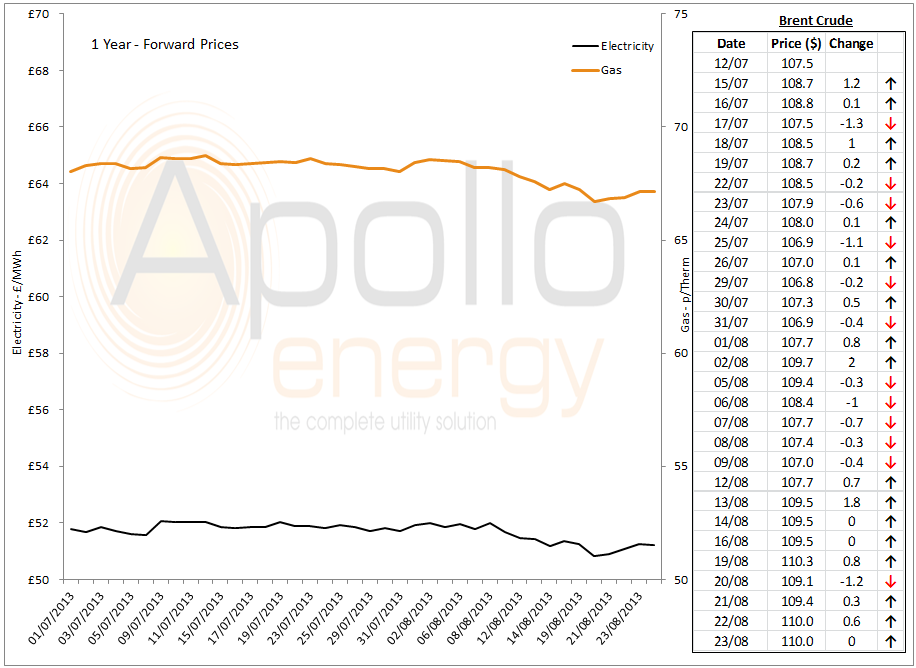 Brent 1st-nearby prices exceeded $110/b yesterday and opened up this morning just under $110.1/b. The WTI/ Brent spread narrowed after reaching -$6/b on Tuesday but closed at -$4.87/b yesterday. Recent data suggests the US, Chinese and European economic market is improving and on-going tensions in North Africa have led to a further increase in oil prices.