Spot power prices climbed higher yesterday following a drop in renewable generation and unplanned outages at thermal facilities. There is no improvement today in terms of thermal availability, while nuclear availability is also down by 4GW; resulting in further gains this morning.

Gas prices softened yesterday morning as supply levels were comfortable due to weaker demand and healthy Norwegian flows. However, a colder weather forecast drove contracts higher in the afternoon. Prices have increased this morning as the Kollsnes processing facility has suffered an unplanned outage and demand levels are set to rise in the coming days.

Gas prices climbed higher yesterday afternoon as demand rose to its highest level since June and a colder weather forecast should result in a further rise next week. Despite the completion of maintenance at the Kollsnes facility, flows did not enter the UK until 10.30am which supported the prompt.

Power prices increased on Tuesday and followed the movement of gas, although weaker coal helped to limit some of the gains. An expected drop in temperatures also provided support with consumption levels set to ramp up next week. The prompt was one of the few contracts to move down, with wind generation forecast to rise today.

Gas prices continued to move higher this morning as an outage at the Kollsnes facility has reduced Norwegian flows into the UK once again. Meanwhile, colder temperatures are expected in the UK next week and the next LNG delivery at South Hook will not arrive for another four days.

The power market is dictated by bullish gas and a stronger demand forecast this morning, although improved wind generation has helped the Day-Ahead contract shed £0.30/MWh from its price. Unfortunately, this rise in wind production is set to be temporary and a significant drop is expected next week, while a several outages at UK power plants have also provided support.

Market close data has revealed that the 1-year forward price for both commercial gas & commercial electricity increased - closing at 41.25ppt and £41.98/MWh, respectively. This can be seen in the graph below. 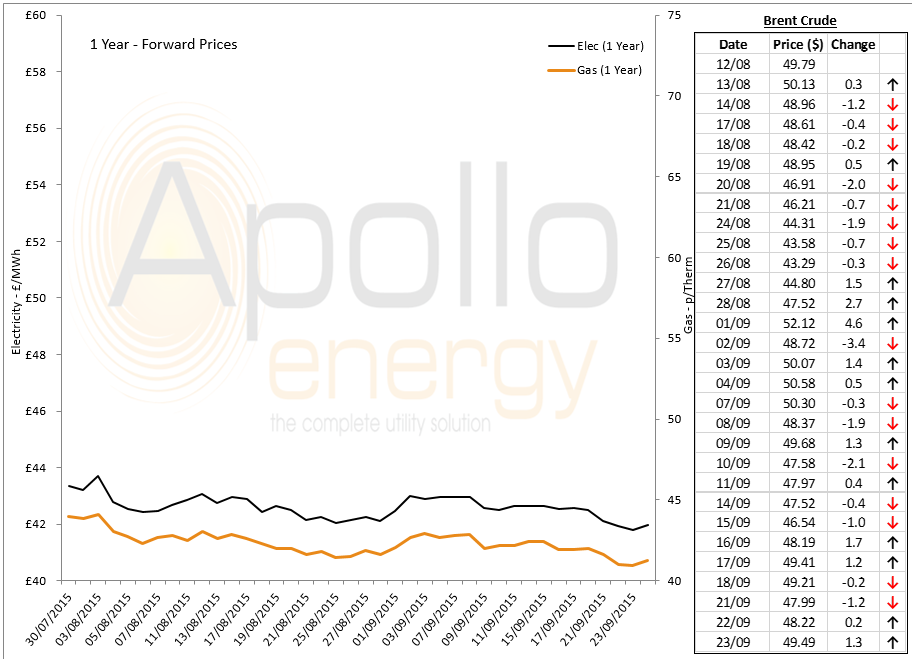 Brent 1st-nearby prices attempted to erase some of yesterday afternoon's gains and currently trade at around $49.5/b. Brent was pushed higher by a report from the American Petroleum Institute, stating that US crude stocks have fallen by 3.7m barrels.