Spot prices were forced down by the warm weather and German solar output which hit a record high of 23GW as well as high nuclear availability in France. This rise in price is expected to be temporary though as a drop in temperatures is forecast and French nuclear availability and German solar production is expected to go down, wind production is also likely to remain low.

Day-Ahead gas made a gain of 0.4ppt and Front-Month saw a rise of 0.15ppt as a consequence of the short system and Front-Month Brent also making gains. On the Far-Curve most of the contracts made a small loss, Winter-13 and Winter-14 changing the most with a drop of 0.2ppt. Storage levels continue to rise and now sit just under 15%. Day-Ahead and Front-Month power displayed a similar trend to the gas curve and Front-Month Brent to close at £49/MWh. There was little change on the rest of the Near-Curve with the carbon market looking stable but the Far-Curve had a bearish outlook with Winter-15 closing £0.35/MWh down.

NBP contracts opened higher than they closed despite a forecast of warmer weather as Brent prices were the deciding factor in today's prices. Linepack opened around 10mcm long due to reduced Langeled flows of 46mcm, while the Bacton interconnector was still in export mode due to the positive outlook of the WD Zeebrugge/ NBP spread. Day-Ahead made a rise of £0.25/MWh with the power curve taking a bullish direction, low wind forecasts a contributing factor. Nuclear generation currently held a healthy 24% of the UK power generation mix considering a fire at a plant in Hartlepool has delayed its restart date.

Market close data has revealed that the 1-year forward price for both commercial gas & commercial electricity made a small loss - closing at 67.69ppt and £51.98/MWh, respectively. This can be seen in the graph below. 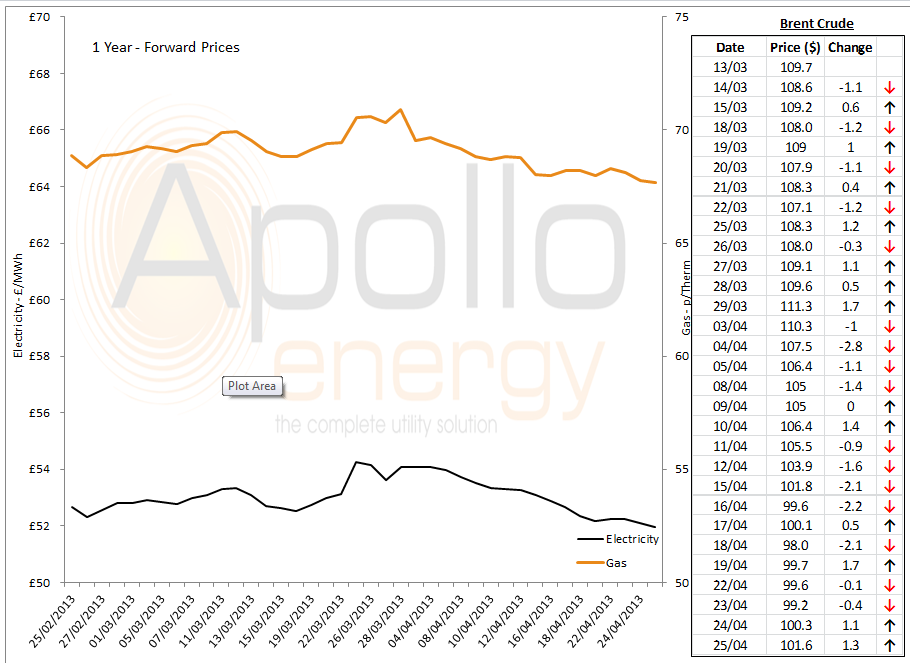 Brent Prices climbed significantly but it is not apparent what the main factors are for this other than falling US gasoline stocks. The weekly EIA report identified a sizeable drop in refinery runs of -0.6Mb/d which is a result of a number of outages.