Hydrogen Train unveiled in the UK

Alstom and Eversholt Rail have unveiled its low-emission hydrogen train which could be seen on UK tracks within two years.

Engineering firm, Alstom have secured a deal which could see hydrogen trains in operation in the UK, in partnership with Eversholt Rail. The eco-friendly train design which has been named the ‘Breeze’ would see existing Class 321 passenger trains converted to hydrogen which would result in water emissions as opposed to harmful CO₂ or diesel.

The firms are now tasked with working with industry stakeholders to develop a business plan to introduce their zero emission trains and hydrogen refuelling infrastructure in the UK.

Alstom and Eversholt claim that hydrogen trains could be in operation up and down the country by 2022 but a recent report by the Times suggests that a deal is already in place to commission 100 Breeze trains within the next two years.

The Breeze conversion of the trains will take place at Alstom’s Widnes facility and a spokesman claims a deal could be announced "relatively soon". 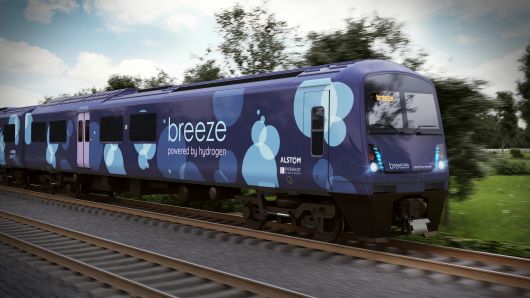 Alstom managing director for UK and Ireland, Nick Crossfield said the Breeze is a "clean new train for the UK with a stylish, modern look" that would be an "ideal solution" in order to reduce the use of diesel trains.

He added: "Hydrogen trains offer an ideal solution for routes which are unlikely to benefit from electrification, and our innovative engineering solution means they can now fit within the UK loading gauge and can quickly be ready to roll on Britain's railways."

Alstom launched its first hydrogen train in Germany in September, with a second commissioned shortly after. The firm now plan to deliver 14 more trains in the Lower Saxony area by 2021.

The trains have a range of 1,000km and are able to run for a full day with one overnight charge. On-board cells convert hydrogen and oxygen into energy, with water the only by-product of this.

In the UK, only half of the nation’s rail network is electrified, with the majority of trains still running on diesel. However, the government have set a target to phase out diesel trains completely by 2040.