Spot power prices are expected to climb higher over the next few days despite a strong wind generation forecast for the rest of this week. The power market has instead taken direction from a colder weather forecast with temperatures expected to be below the seasonal norm for the majority of April. The current cold stint pushed demand levels higher which led to an under-supplied system yesterday, supporting most gas contracts. The system remained short this morning following a drop in BBL flows and LNG send-outs; further gains can be expected. Today's prices can also be found in an easy to read table on our 'current UK energy price' page.

Day-Ahead gas moved higher yesterday as demand levels increased and output at Centrica's pipelines dropped. Centrica's North Morecambe gas field suffered an outage and this led to a halt in flows via the Barrow terminal. Elsewhere, April-15 and Summer-15 both displayed gains due to the colder weather forecast. On the power curve the prompt contract displayed little movement yesterday as strong wind generation has countered a rise in demand. Meanwhile, a below average weather forecast has helped the font-month contract climb higher.

Movement on the gas curve was rather mixed this morning as a short UK gas system supported the near-curve, while easing concerns regarding Centrica output helped to weigh on seasonal contracts. Power prices largely followed the movement of gas although Day-Ahead power was dictated by a slight drop in wind production tomorrow and added £0.75/MWh to its price. Cold weather remains an influencing factor although temperatures could be milder than initially expected.

Market close data has revealed that the 1-year forward price for both commercial gas & commercial electricity recorded a loss - closing at 48.38ppt and £45.73/MWh, respectively. This can be seen in the graph below. 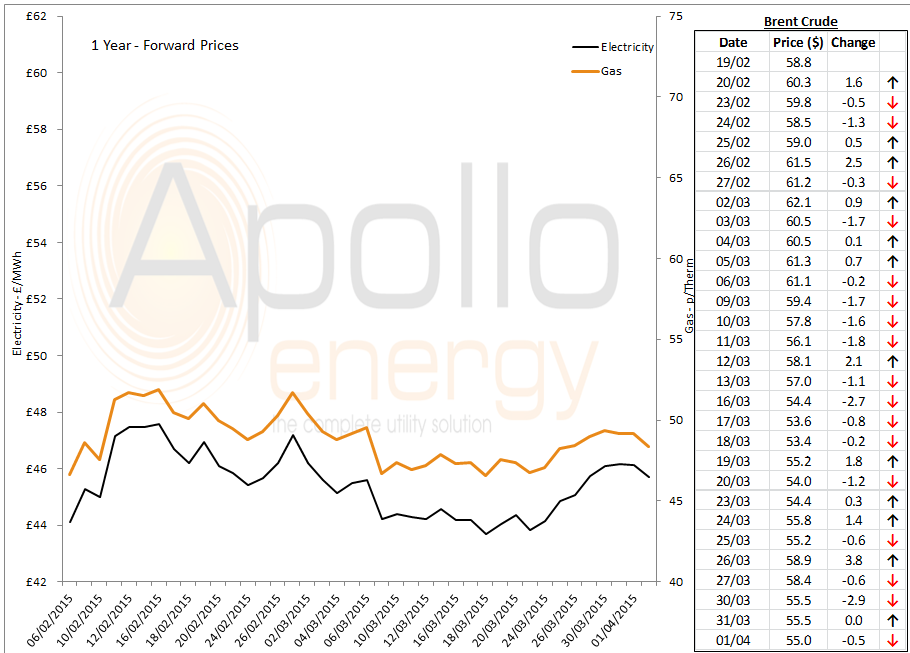 Brent 1st-nearby prices have recorded a loss of $0.49/b and currently trade at $55.04/b as talks regarding Iranian sanctions continue despite yesterday's deadline.