Spot power prices remain quite low for this time of year thanks to healthy levels of wind production, with record-highs expected in Germany. Meanwhile, temperatures are expected to turn colder over the weekend which should provide support in the coming days. The colder weather forecast helped gas prices to increase yesterday although weaker Brent offered some downward pressure on the far-curve. A further revision in the monthly weather forecast shows that temperatures could be even colder than expected; more bullish movement is expected as a result. Today's prices can also be found in an easy to read table on our 'current UK energy price' page.

Most gas contracts displayed an upward trend yesterday with a below-average weather forecast for April the main market driver; temperatures are expected to drop by around 2 °C over the weekend. Further out, some contracts posted small losses as the British Pound strengthened against the Euro and Brent decreased. In terms of power, downward movement was observed on seasonal contracts, while front-month recorded a gain during a session of mixed movement. Winter contracts followed their gas counterparts and decreased, while the colder weather offset strong wind and helped the prompt contract to increase.

Gas prices have continued on an upward trend this morning as cold weather continues to dictate the market. Concerns regarding a reduction in capacity at the Rough storage facility have eased slightly but bearish movement on the curve was minimal. Power prices are also influenced by the colder weather forecast this morning which has helped prices on the near-curve climb higher. Wind generation remains extremely healthy but this had little bearing on the day-ahead contract which opened at a premium.

Market close data has revealed that the 1-year forward price for commercial gas increased slightly while commercial electricity recorded a small loss - closing at 49.20ppt and £46.15/MWh, respectively. This can be seen in the graph below. 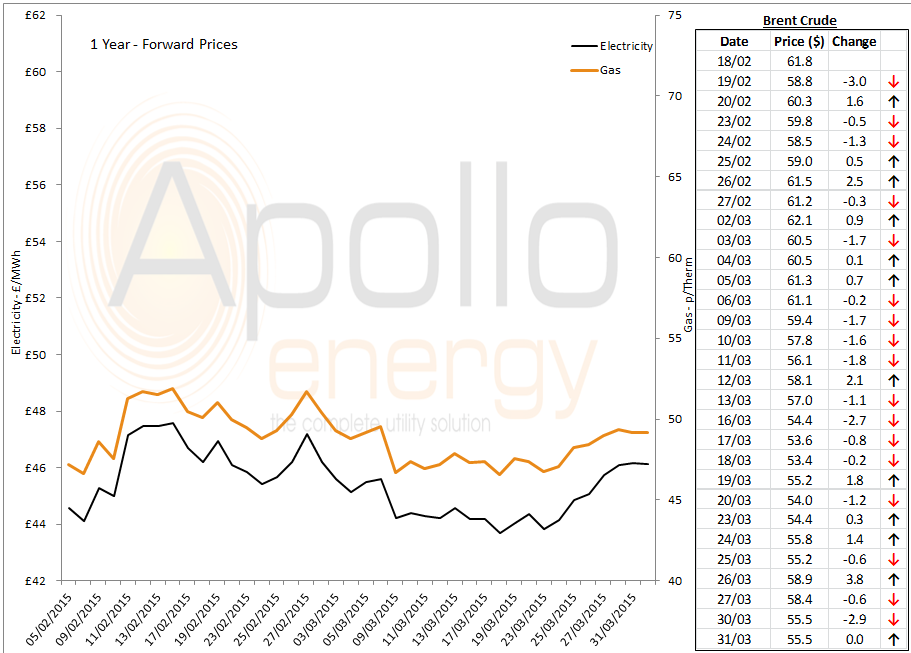 Brent 1st-nearby prices were rather volatile yesterday but only display a small gain this morning and remain around $55.5/b.