Spot prices went up yesterday as wind generation was forecast to decrease but near-term prices continued to make losses. Wind generation is expected to improve over the weekend but will be limited next week and nuclear generation will remain lower until Tuesday. BBL flows returned to average levels and Langeled flows were also healthy, however LNG flows are expected to be limited overnight; this should lead to slightly firm prices on the UK gas market. Today's prices can also be found in an easy to read table on our 'current UK energy price' page.

The August-13 contract closed at 66.90ppt in its last day of trading while the new Front-Month, September-13 also closed higher at 66.15ppt. Day-Ahead went up by 0.30ppt to close at 66.80ppt following maintenance at numerous facilities while Linepack was also short throughout the session. The power curve was influenced by bullish gas and the Front-Months rose by around £0.30/MWh. Lower nuclear availability was countered by warmer temperatures which led to lower demand while interconnectors in France and Holland were at full capacity.

The gas system opened around 15mcm long despite reduced LNG send-outs; Milford Dock is expecting one cargo to arrive on the 7th August. On the far curve, most contracts rose by around 0.50ppt on the back of stronger Brent prices. Day-Ahead power increased by £0.50/MWh as outages were seen at 4 nuclear units but the expected drop in demand tomorrow has restricted the gains somewhat. The System Buy Price was over £114.88/MWh in the morning as numerous hydro and CCGT units have been brought online in an attempt to balance the system. Wind generation is expected to hit 2.9GWh at its peak and holds around 4% of the generation mix.

Market close data has revealed that the 1-year forward price for both commercial gas & commercial electricity made gains - closing at 68.58ppt and £51.98/MWh, respectively. This can be seen in the graph below. 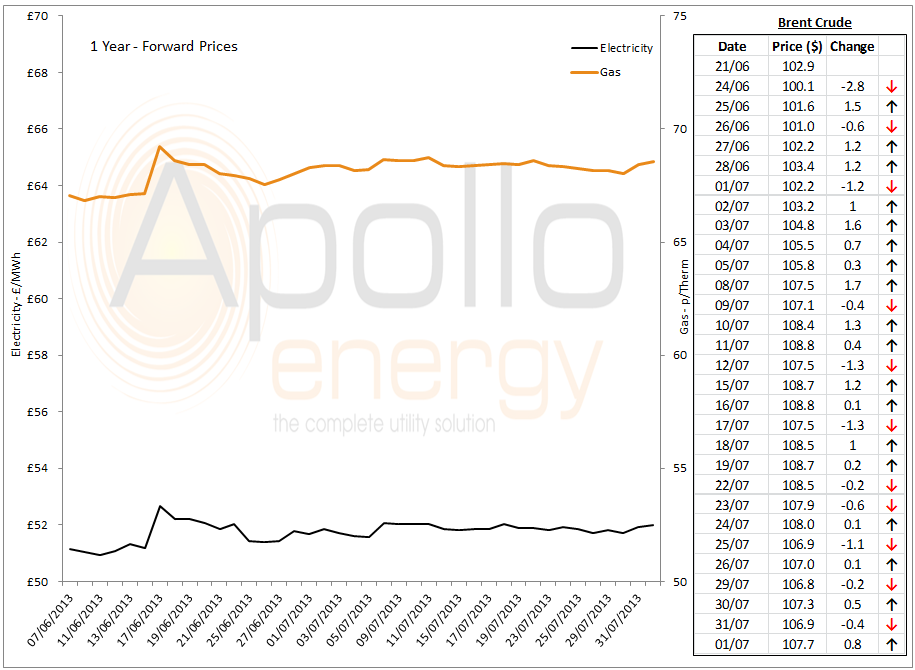 Brent prices hit a low of $105.73/bbl yesterday but made small gains throughout the session and timespreads also rose higher. Lower supply levels were the main factor in the price increases although the latest EIA report was quite stable.