Lower demand in the coming days should help supply levels improve after a slight fall on Wednesday. The UK gas system opened long while Belgian flows were still at zero although Norwegian, Langeled and BBL flows were healthy. Today's prices can also be found in an easy to read table on our 'current UK energy price' page.

Day-Ahead gas fell by 1.2ppt as supply levels have improved following strong Norwegian deliveries. BBL flows were also stable as were South Hook send-outs which helped contracts turn bearish. Front-Month decreased by 0.35ppt and is currently trading higher than Day-Ahead while Winter-13 ignored stronger Brent prices and made a loss of 0.15ppt. On the power curve, Front-Month followed the same direction as gas and lost £0.20/MWh to close at £47.20/MWh. Day-Ahead also fell by £0.75/MWh as a result of stronger wind generation and improving nuclear availability. There was little movement on the Far-Curve as rising Brent was cancelled out by a drop in APi2 coal prices.

The UK gas system opened at 12mcm long this morning with low demand levels of 125mcm/day. Day-Ahead went up despite the healthy system and added 1.05ppt to its price to open at 66.25ppt while September-13 lost 0.24ppt and October-13 fell by 0.10ppt. Most seasonal contracts opened at a premium due to stronger Brent prices; Summer-15 increasing by 0.50ppt. Most power contracts displayed a bearish outlook as a number of plants returned online yesterday following maintenance. Day-Ahead opened £2.25/MWh lower and Front-Month shed £0.20/MWh from its price. Further along the curve, contracts ignored the increase in Brent prices and recorded minor losses.

Market close data has revealed that the 1-year forward price for both commercial gas & commercial electricity went down - closing at 68.53ppt and £51.85/MWh, respectively. This can be seen in the graph below. 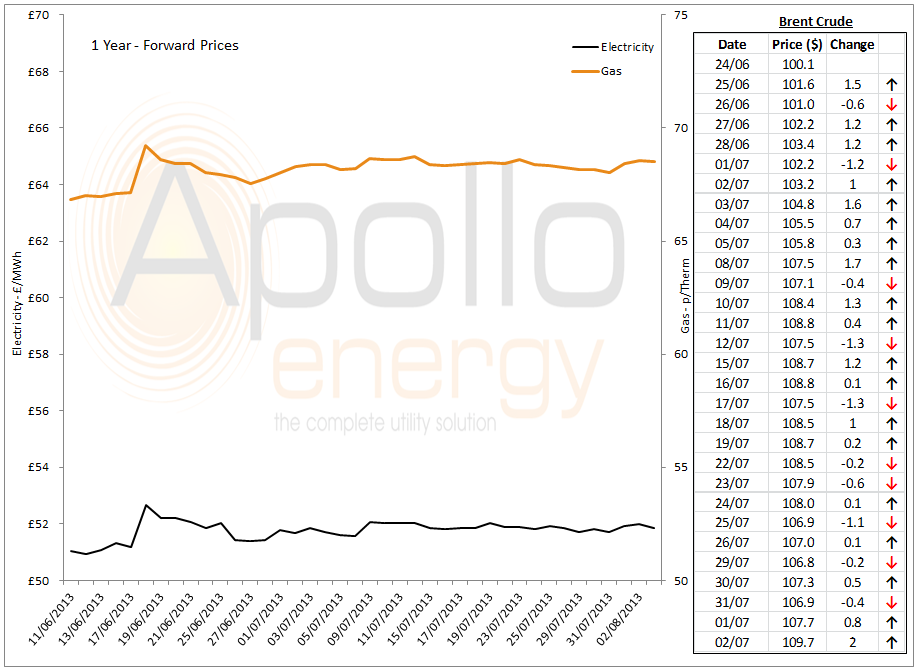 Brent and WTI prices made gains yesterday on the back of a more stable financial market and Chinese, Eurozone and UK PMIs which were better than expected. The US ISM survey was stronger than anticipated and risky assets were also positive.