Spot prices decreased yesterday thanks to the usual drop in demand on Fridays although reduced wind production restricted the bears from seizing full control of the curve. Today prices have moved higher as contracts have taken influence from higher gas and coal prices. Gas prices also moved down yesterday thanks to slightly lower demand levels and a healthy UK gas system. Today however a short system due to weaker gas flows have seen prices make a significant increase. Today's prices can also be found in an easy to read table on our 'current UK energy price' page.

Day-Ahead gas made a loss in yesterday's session and fell by nearly 3ppt thanks to a slight drop in demand and an almost balanced system. The Rough facility reverted back to injection mode later in the afternoon after withdrawing at a rate of 11mcm in the morning. The British Pound strengthened against the Euro somewhat and this movement was the main driver of prices further along the gas curve. The power curve displayed a series of losses although Day-Ahead saw a slight increase of £0.10/MWh as a lower wind generation and the usual drop in demand on Friday's cancelled each other out. EUA contracts fell as a consequence of Germany's continued support for carbon back-loading which helped seasonal contracts move down.

The UK gas system opened short which led to Day-Ahead registering a gain of 3.65ppt as gas flows in general weakened this morning. The main issue was a restriction at a Norwegian gas field which reduced Langeled's overall output. Front-Month fell by 0.05ppt as above average temperatures are expected for December, while further along the curve seasonal contracts saw price increases ranging between 0.05ppt and 0.45ppt. Day-Ahead power took influence from its gas counterpart and added £4.60/MWh to its price to open at £53.10/MWh. Bullish movement was observed across the curve as Front-Month APi2 coal rebounded by $0.05/tn after closing at a discount yesterday, positive supply data is thought to be the reason for coal's upward movement.

Market close data has revealed that the 1-year forward price for commercial gas made a loss while commercial electricity moved higher - closing at 66.68ppt and £52.48/MWh, respectively. This can be seen in the graph below. 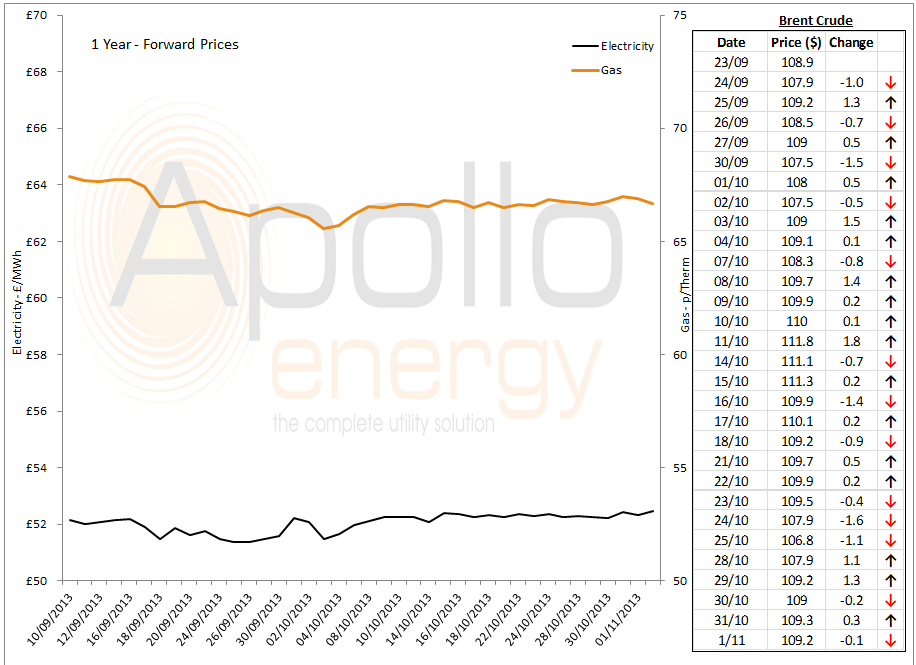 Brent 1st-nearby prices have climbed higher with Front-Month Brent increasing to $109.23/b this morning.