Spot prices have made a series of losses over the last few days due to improved wind generation and an increase in conventional power production. In terms of gas, Norwegian flows decreased on Friday due to an outage at the Kollsnes processing plant and with higher demand levels expected for today NBP prices moved up. Today UK LDZ demand has risen following a sharp drop in temperatures however the system has opened long thanks to an improvement in Norwegian and BBL flows. Today's prices can also be found in an easy to read table on our 'current UK energy price' page.

Near-curve gas prices moved higher at the end of Friday's session with December-13 climbing by 0.25ppt. Day-Ahead added 0.15ppt to its price despite a UK gas system which closed 7mcm long following an improvement in LNG flows via South Hook. Further along the curve seasonal contracts took a different direction and made losses which ranged between 0.05ppt and 0.60ppt. The power curve saw limited movement on Friday with Day-Ahead falling by £0.10/MWh to close at £53/MWh, while Front-Month contracts made gains ranging between £0.20/MWh and £0.65/MWh taking influence from gas contracts. On the far curve, seasonal contracts moved down slightly and took direction from bearish Brent.

A number of terminals have seen improved output including Bacton BBL, South Hook and Langeled; this in turn led to Day-Ahead registering a 0.10ppt price drop as the system opened 22mcm long. The rest of the curve saw numerous price increases with Front-Month opening 0.45ppt higher and seasonal contracts also opening at a premium. Day-Ahead power fell this morning and followed its gas counterpart closely; renewable energy output is also expected to improve tomorrow which added to the bearish sentiment. In contrast most contracts further along the curve strengthened as a consequence of higher gas and coal prices.

Market close data has revealed that the 1-year forward price for both commercial gas & commercial electricity climbed higher - closing at 66.75ppt and £52.58/MWh, respectively. This can be seen in the graph below. 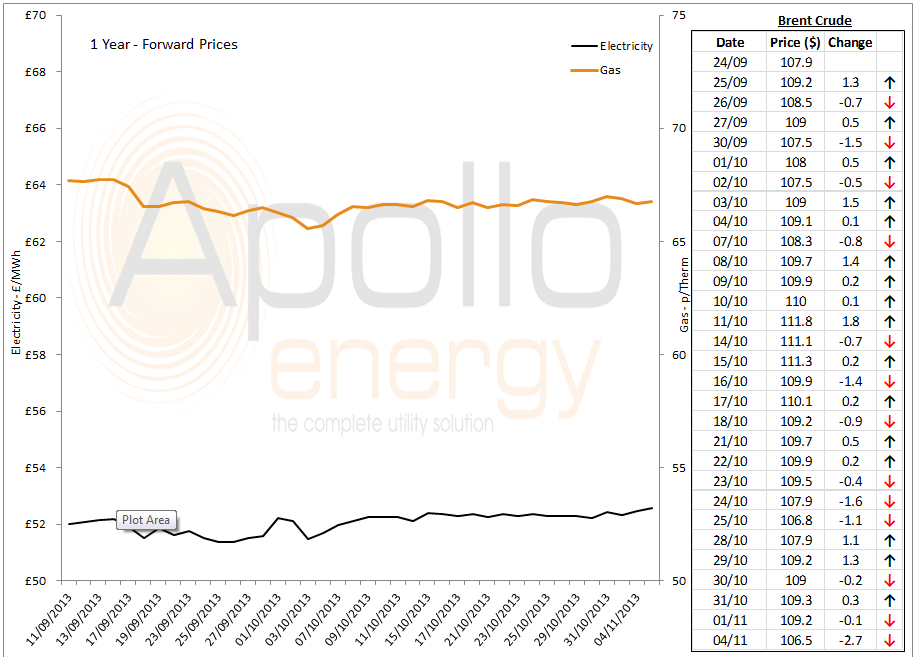 Brent prices fell on Friday and registered a loss of almost $3/b, temporarily dropping below $106/b. Prices took influence from a stronger US Dollar on the back of positive economic data while the Brent/WTI spread narrowed slightly to -$11.6/b.