Spot power prices inched higher yesterday as lower wind generation has been forecast for the rest of the week, while several outages also occurred at coal and lignite-fired power plants. Prices could move down this afternoon as the coal market is expected to weaken further. Gas prices also moved higher as Norwegian flows decreased by 30mcm which led to a short UK gas system. Today could see contracts take a slightly bearish direction as low demand levels are likely to outweigh the reduction in Norwegian imports. Today's prices can also be found in an easy to read table on our 'current UK energy price' page.

Gas contracts moved down at the end of yesterday's session with Day-Ahead falling to its lowest point for a number of years. High storage levels and lower demand helped Front-Month drop to around 50ppt. The power curve mirrored gas as Day-Ahead decreased by £0.25/MWh due to the improved wind generation forecast for today. Meanwhile, Front-Month recorded a £0.45/MWh loss as the majority of contracts tracked their gas counterparts closely.

Gas prices continued their downward trend this morning with some contracts falling by as much as 2.10ppt; Day-Ahead was the biggest mover while May-14 decreased by 1.60ppt. Seasonal contracts also moved down but the losses were less prominent with Winter-14 opening at a 0.90ppt discount. Day-Ahead power fell by £1.30/MWh as bearish movement was displayed across the curve; Day-Ahead took influence from a drop in wind generation which is expected for the rest of the week. The losses observed on the near-curve were much larger than those on the far, as quarterly and seasonal contracts fell by up to £0.50/MWh.

Market close data has revealed that the 1-year forward price for both commercial gas & commercial electricity decreased - closing at 58.39ppt and £49.35/MWh, respectively. This can be seen in the graph below. 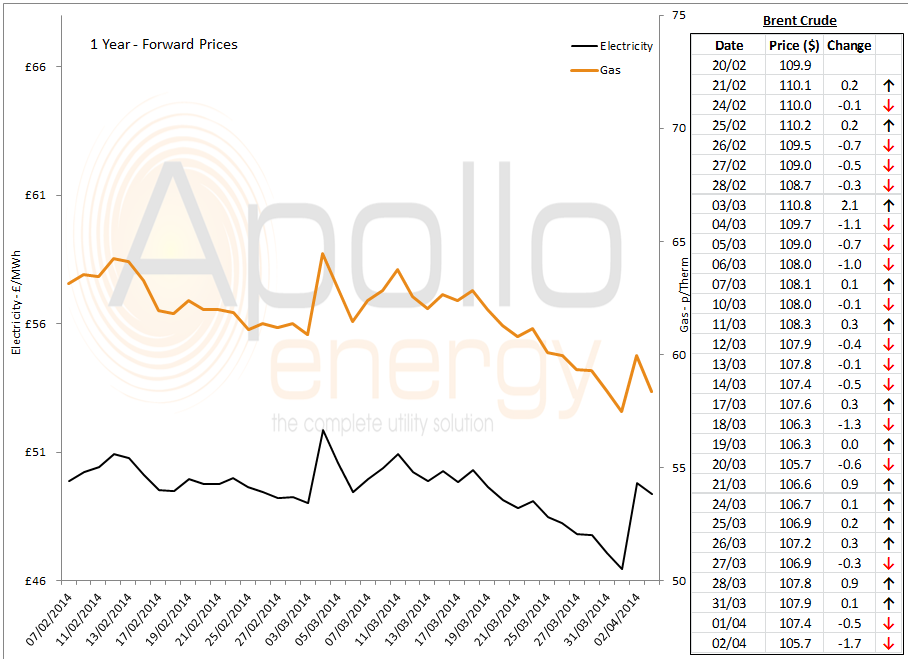 Brent 1st-nearby prices fell by over $2/b yesterday to offset the gains which were recorded last week; WTI followed a similar direction and shed $1.84/b from its price.