Spot power prices continue their downward trend as a stable outlook in terms of fundamentals means no upward revisions have been forecast for the next few days; further decreases are expected this afternoon. Milder temperatures continue to be the main market driver for gas as demand levels continue to drop. Low demand has helped towards a balanced system despite weaker gas flows coming into the UK from Norway; as a result further bearish movement is expected. Today's prices can also be found in an easy to read table on our 'current UK energy price' page.

Gas contracts displayed numerous losses across the curve as Day-Ahead closed at a 0.40ppt discount and Front-month shed 0.35ppt from its price. Three LNG deliveries are expected to arrive in the UK in the coming weeks while the UK gas system was long for the majority of yesterday's session. Day-Ahead power ignored the mild weather and low demand and instead took direction from a low wind production forecast; the contract rose by £1.70/MWh as a result. The rest of the curve displayed mixed movement with some contracts failing to budge by more than £0.05/MWh.

The UK gas system opened 19mcm short this morning as Langeled flows remain low, currently around 25mcm. Maintenance has also been scheduled in Norway at the end of April which will last until late May while output via BBL has also dropped. This weaker supply picture has helped to limit the bearish effect of low demand levels and pending LNG deliveries as most contracts experienced minor price-drops. Power demand is also low which led to significant losses across the curve although weaker wind generation helped Day-Ahead move higher. Meanwhile, seasonal contracts continued to weaken as EUA carbon contracts have fallen further.

Market close data has revealed that the 1-year forward price for both commercial gas & commercial electricity decreased - closing at 57.44ppt and £49.08/MWh, respectively. This can be seen in the graph below. 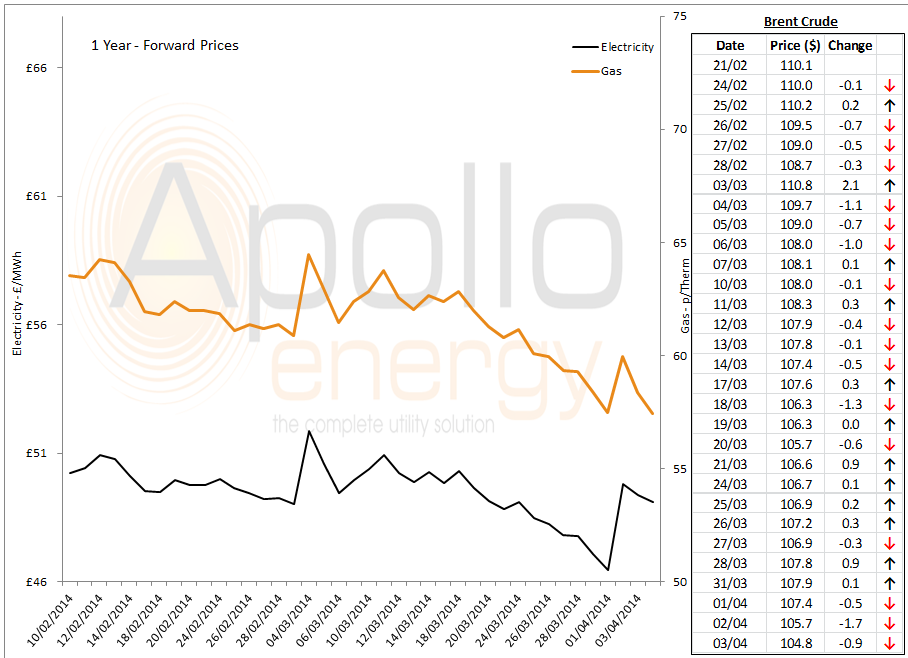 Brent 1st-nearby prices and WTI prices have fallen by around $2/b with Brent decreasing to just over $104/b; an improved situation in regards to Libyan oil exports is the main factor for this downward movement.