Spot power prices decreased yesterday on the back of a strong wind generation forecast in most European countries. Solar generation is also higher in Germany and nuclear availability is on the rise in France, however, stronger gas could push prices higher this afternoon. European gas prices followed a downward trend in yesterday's session following an increase in Norwegian supply, although the UK gas system was still under-supplied. Gas prices have climbed higher this morning due to above average demand levels, with the short gas system the main market driver. Today's prices can also be found in an easy to read table on our 'current UK energy price' page.

Near-curve gas contracts fell during Monday's session as demand levels decreased and Norwegian flows strengthened significantly. Additional LNG deliveries are also scheduled to arrive at South Hook this week, although send-outs were not as strong as last week which led to an under-supplied system, restricting the losses. Power contracts also moved down across the curve with an improved weather forecast for later in the week helping to weigh on near-curve prices. The generation/ demand picture is also healthy with capacities set to increase and warmer temperatures expected to reduce consumption.

Gas prices have moved higher due to a short UK gas system this morning as LNG send-outs have fallen from last week's high levels. Meanwhile, UK storage stocks are much lower than this time last year although this situation is expected to improve over the summer. Power contracts have tracked the movement of gas and have ignored a comfortable generation outlook. Stronger Brent has offered some support further along the curve, while a lower demand forecast has restricted some of the gains on the near-curve.

Market close data has revealed that the 1-year forward price for commercial gas increased, while commercial electricity recorded a loss - closing at 45.89ppt and £44.08/MWh, respectively. This can be seen in the graph below. 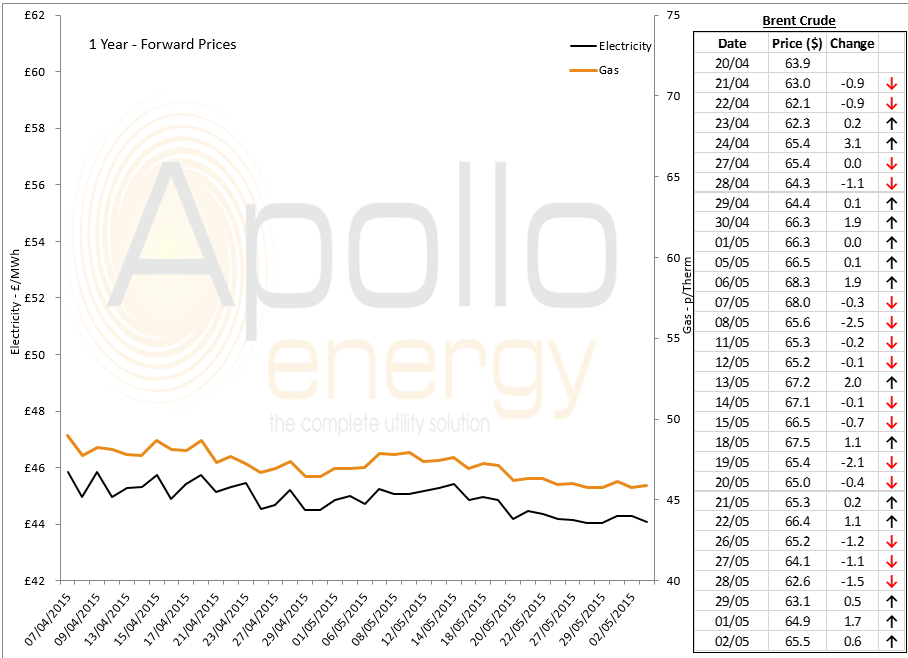 Brent 1st-nearby prices displayed a small loss yesterday but have increased by $0.60/b this morning and currently trade at $65.45/b. The market currently awaits tomorrow's US inventories report with very few factors dictating prices today.