Spot power prices showed mixed changes yesterday as a warmer weather forecast countered an expected drop in wind generation which had reached high levels in the previous two days. Prices have opened at a premium this morning with influence coming from stronger gas. Gas prices also varied in their movement yesterday as a drop in Norwegian flows (as a result of an outage) pushed some contracts higher, despite a healthy supply picture overall. The UK gas system remains short this morning which has helped contracts to rally higher and this afternoon's outlook is stable-to-bullish. Today's prices can also be found in an easy to read table on our 'current UK energy price' page.

The majority of UK gas contracts climbed higher yesterday due to a drop in supply at the Langeled pipeline which resulted in an under-supplied system. An outage also occurred at the Troll field which further reduced Norwegian imports. Furthermore, the Euro strengthened against the British Pound and oil prices also increased in value, adding to the bullish sentiment. Power prices tracked the movement of gas and gains were observed across the curve with further support coming from higher fuel prices. An outage at a nuclear unit and a weaker wind generation forecast for today also helped the Day-Ahead contract to climb higher.

Gas contracts have continued to inch higher this morning as the UK gas system remains short, although the overall supply picture in Europe is generally healthy. An outage and a drop in flows via Langeled (the UK's main capacity connector) is the cause of the UK's undersupply. Power contracts have followed their gas counterparts again this morning and moved higher despite a warmer weather forecast. Day-Ahead has posted further gains as wind generation has fallen and nuclear availability is also reduced.

Market close data has revealed that the 1-year forward price for both commercial gas & commercial electricity increased - closing at 46.32ppt and £44.40/MWh, respectively. This can be seen in the graph below. 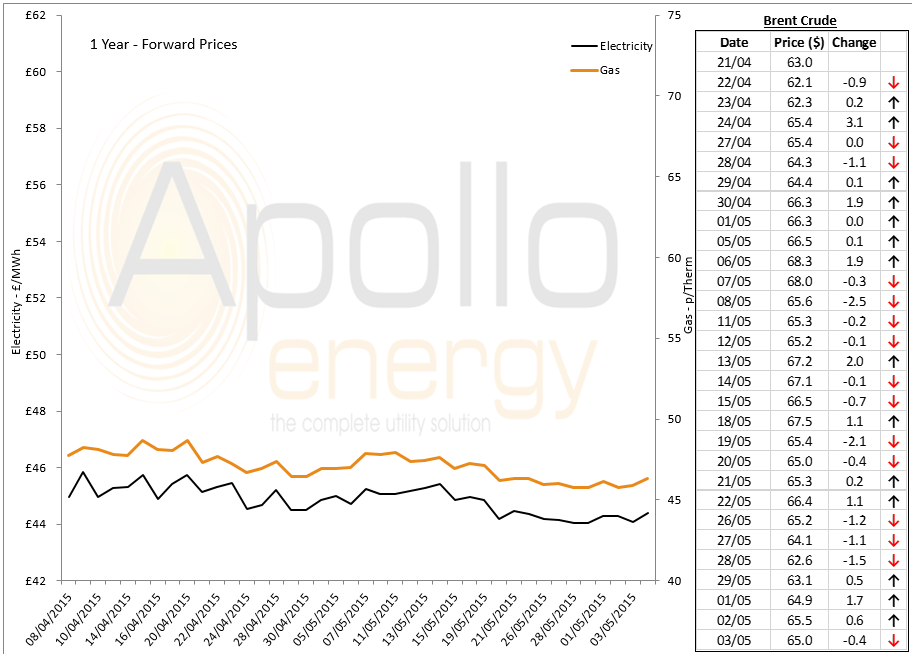