Spot power prices moved higher yesterday and today but a downward trend is expected for the rest of the week. The bears are expected to take control later in the week as renewable generation and nuclear availability is set to increase. However, a slight uptick in prices could occur this afternoon if no positive news comes out of Ukraine. Gas prices climbed higher yesterday as maintenance at the Langeled pipeline resulted in an under-supplied gas system. Langeled flows are expected to return today and will significantly improve the overall supply picture but marginal upward movement is expected this afternoon, with impetus coming from Ukraine. Today's prices can also be found in an easy to read table on our 'current UK energy price' page.

Political tensions in Ukraine pushed prices higher on Monday with the larger gains displayed on the near-curve, with Day-Ahead rising by 1.55ppt and November-14 closing at a 0.50ppt premium. Further along the curve the biggest gain was recorded by Summer-15 as maintenance at the Langeled pipeline offered support across the curve. Power prices took direction from gas with the gains ranging from £0.10/MWh for Front-Month to £0.75/MWh for November-14. Further along the power curve some contracts including Summer-15 and Winter-16 recorded a small loss following the return of a nuclear power plant.

Gas contracts moved higher once again this morning as tensions in Ukraine have worsened somewhat with talks between officials most likely leading to EU sanctions being put in place. St Fergus flows rose by 13mcm although Bacton BBL output dropped to 8mcm, while the Langeled pipeline is still offline until later in the day. The majority of power contracts moved higher this morning as stronger gas was the main driver at the beginning of today's session. A drop in nuclear availability has been offset by gas and coal-fired generation, while wind production also remains low. Weak renewable generation has helped Day-Ahead climb higher.

Market close data has revealed that the 1-year forward price for both commercial gas & commercial electricity climbed higher - closing at 59.00ppt and £51.03/MWh,respectively. This can be seen in the graph below. 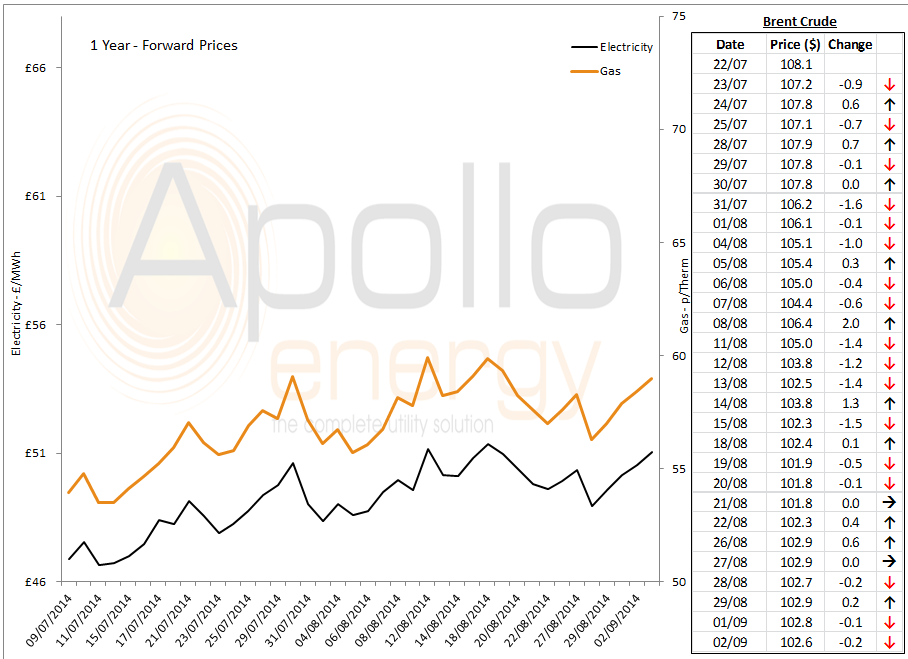 Brent 1st-nearby prices displayed little change yesterday due to a public holiday in the US. Prices recorded a loss of around $0.40/b and are currently trading below $102.8/b.