Spot power prices are showing a steady rise at present as energy demand is growing and renewable generation has weakened. Fundamentals are generally bearish this morning and prices are expected to stabilise this afternoon. Gas prices continue their bullish trend as the risk premium continues to grow in regards to Russian supply. A further price increase is expected this afternoon as the Langeled pipeline has been shut down for maintenance and the Ukrainian crisis remains volatile. Today's prices can also be found in an easy to read table on our 'current UK energy price' page.

Temperatures were revised higher for the start of September which helped to weigh on near-curve contracts on Friday. However, the main driver of prices was the on-going tensions in Ukraine which pushed contracts higher across the curve. Political tensions in Eastern Europe pushed power prices higher on Friday with most contracts following their gas counterparts. Wind generation was forecast decrease on Monday which helped Day-Ahead climb higher, while reduced nuclear availability also played a part.

Gas contracts displayed gains this morning once again as there has been no improvement in the Ukrainian situation, although talks between officials are on-going. The UK gas system opened 5mcm long as overall gas flows were 24mcm higher compared to Friday as Bacton BBL output has increased to 20mcm. Gas-fired generation holds a 35% share of the UK generation mix, while coal holds 5% as wind generation has dropped significantly today. Carbon contracts have held firm from last week's levels and Brent has opened at a $0.06/b discount.

Market close data has revealed that the 1-year forward price for both commercial gas & commercial electricity climbed higher - closing at 58.40ppt and £50.55/MWh,respectively. This can be seen in the graph below. 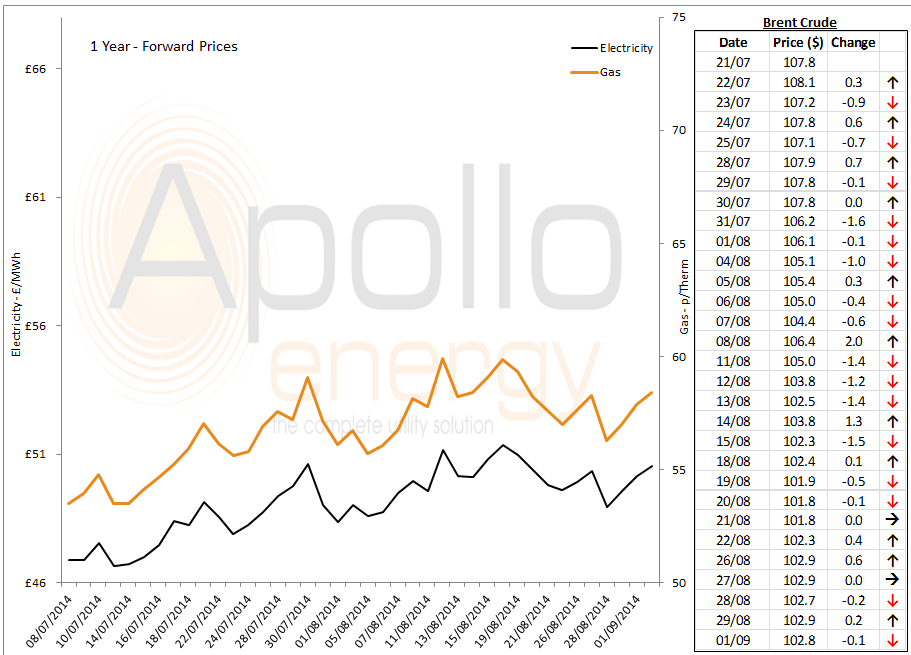 Brent 1st-nearby prices climbed above $108/b on Friday, while WTI rose to $96/b as oil prices display a gradual rise. Tensions in Iraq and Ukraine are the current market drivers which have resulted in supply worries.