Spot prices opened the session down from their Friday closing price due to higher temperatures which resulted in lower demand. This bearish trend isn't expected to change in the next few days as the warm weather should continue. Higher nuclear availability is expected in France for the rest of the week which should also help spot prices fall.

Gas contracts made losses on Friday with Day-Ahead falling by 0.15ppt and June-13 closed 0.25ppt down on its last day of trading. The system remained steady throughout the day after opening at 17mcm and the gas curve managed to close at a discount despite numerous plants expected to go offline today. The power curve did not display any real trend as some contracts mirrored their gas counterparts whilst some contracts went up due to the expected outages, Day-Ahead making a gain of over £1.00/MWh. A number of plants were switched offline on Friday and the French interconnector's capacity fell to 500MW after suffering a few issues.

Day-Ahead made a loss of 1.85ppt and Front-Quarter shed 0.75ppt as the gas curve saw discounts across the board. The system opened 42mcm long with increased Norwegian flows as a consequence of Langeled flows returning to normal levels. Day-Ahead power fell by £1.65/MWh taking direction from gas, ignoring the decrease in wind generation which dropped by 11GW. On the Far-Curve there was little change, Winter-13 saw a £0.10/MWh decrease and Winter-15 went up by £0.10/MWh.

Market close data has revealed that the 1-year forward price for both commercial gas & commercial electricity made losses - both closing at 67.91ppt and £51.93/MWh, respectively. This can be seen in the graph below. 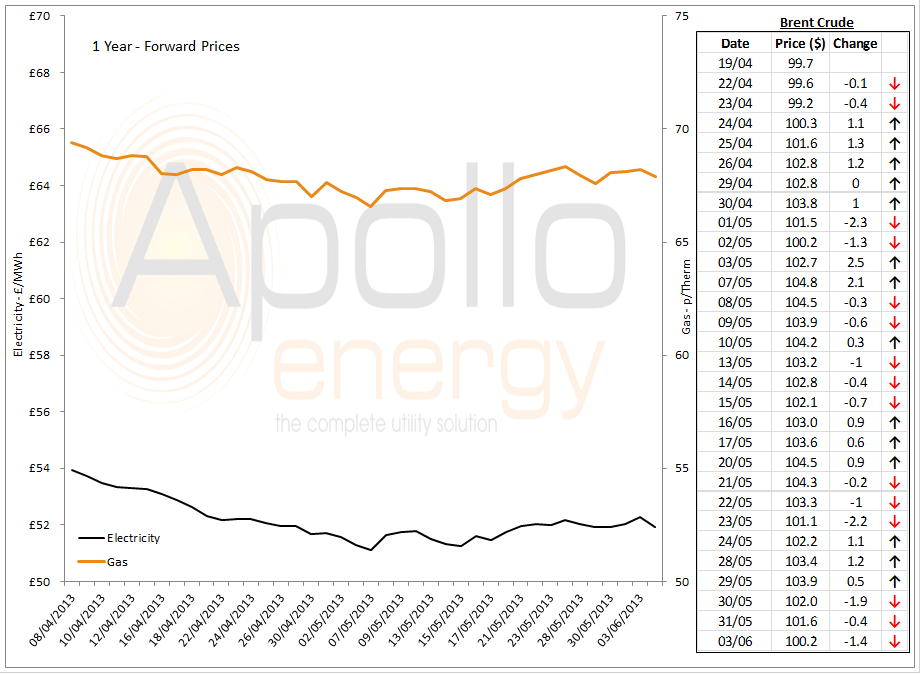 Brent 1st nearby prices fell by around 2$/b on Friday as a result of risky assets being sold off late in the session. The OPEC meeting was uneventful with no change to quotas which currently stand at 30 Mb/d; the next meeting is scheduled for December 4th.