Spot prices are expected to fall further over the coming days as a result of the continued warmer weather and healthy supply. The drop in prices could be limited though due reduced nuclear availability and hydro production.

The gas curve saw a series of losses at yesterday's close except Summer-14 which made a small gain, Day-Ahead fell by 0.65ppt and Front-Month shed 0.50ppt. Higher Norwegian and LNG flows led to a long system and the warm weather resulting in lower demand were the main causes for the discounted contracts, the Far-Curve also experienced losses but were less prominent.

The power curves displayed a slightly bearish trend and followed its gas counterpart with Day-Ahead going down by £0.50/MWh to close at £50.85/MWh. On the Far-Curve Winter-14 fell by £0.30/MWh on the back of EUA prices and the majority of contracts saw a drop of £0.10/MWh.

Gas contracts saw mixed direction this morning, Day-Ahead opened 0.55ppt down and Front-Month saw no change. The improved temperatures are expected to last throughout the week which has reduced demand which is the main factor for any price drops. A series of gains were observed on the Far-Curve with Winter-15 going up by 0.05ppt and Summer-14 rising by 0.15ppt as a consequence of stronger Brent prices.

The power curve also displayed no real trend and mirrored the gas curve somewhat with Day-Ahead opening 0.70/MWh down and Front-Month showing no movement. The rest of the curve also saw minimal movement although Q4-13 made a gain of £0.45.MWh.

Market close data has revealed that the 1-year forward price for both commercial gas & commercial electricity made losses - both closing at 67.40ppt and £51.70/MWh, respectively. This can be seen in the graph below. 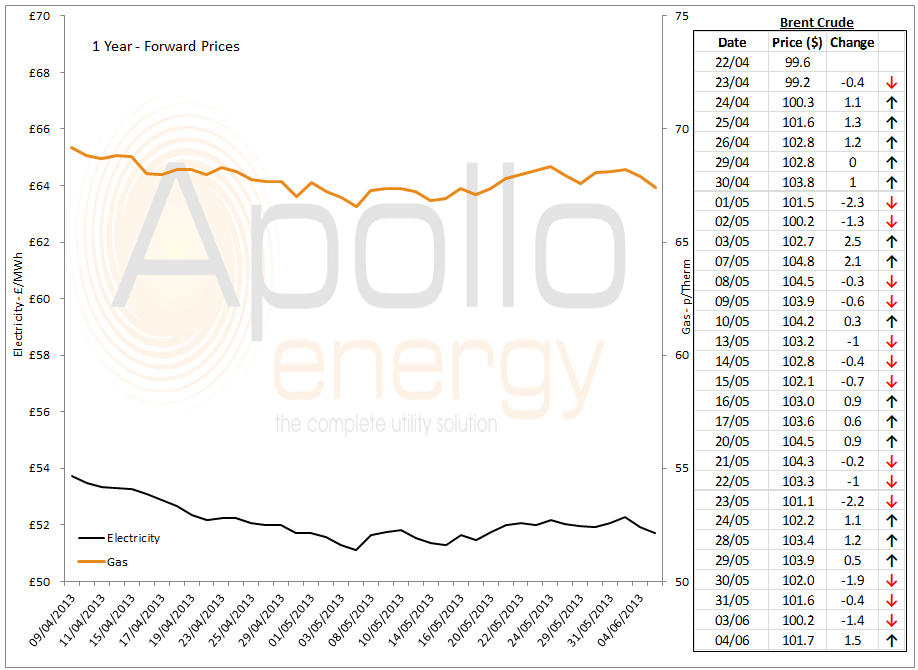 Brent prices hit a low of 99.66$/b yesterday but bounced back to 102.48$/b at the close of the session. The EUR, USD and equity markets went up yesterday following the latest ISM survey which displayed weak data, but the rebound was largely down to the announcement that the North Sea's Buzzard field would be closing at the weekend.